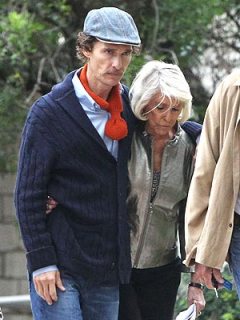 When I first noticed the startling photos of Matthew Mcconaughey after he’d lost so much weight because he’s playing a character with AIDS, I skipped over it fast. I’ve seen and watched what AIDS can do to people first hand and it’s not always something I like to revisit. But I did want to write a post about it because it’s also good to revisit things like this to in order to keep yourself grounded and to remember all those people who have gone through full blown AIDS and died from full blown AIDS. Watching it is nothing compared to what those people with full blown AIDS went through first hand.

As a side note, for those who are not familiar with AIDS, or what it was like during the height of the epidemic before FDA approved HIV drugs were around, I suggest reading John Irving’s latest novel, “In One Person,” for a first hand account of how things went down. After going through so much with people I knew in the 90’s (and still know now) with AIDS, I found Irving’s book to be the most comprehensive, accurate, work of fiction ever written to date that discusses AIDS. It’s not something I’ve written about often in fiction because, as I said, I don’t like to revisit some things in that much detail, and I’m not sure I can be objective enough about it to do it justice. And when you’re writing fiction it’s important to be objective in order to capture a variety of topics and characters. In short, if you are a very liberal Democrat and you can’t write an objective Republican character, something’s wrong with your basic writing skills…in my opinion.

What surprised me the most about Mcconaughey’s images were how accurate they looked. That wasted look I’ve seen before with people who are in full blown AIDS, where T-cell counts are so low you don’t even have to wonder, is not something you forget. And from what I can see, Mcconaughey nailed it with the look he was trying to achieve. 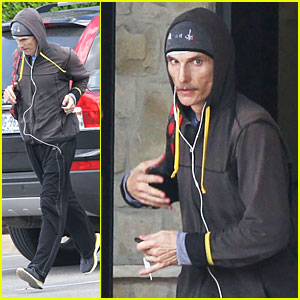 The movie isn’t about a gay man. Here’s the IMDB blurb:

Loosely based on the true-life tale of Ron Woodroof, a drug taking, women loving, homophobic man who, in 1986 was diagnosed with full blown HIV/AIDS and given thirty days to live. He started taking the Food and Drug Administration (FDA) approved AZT, the only legal drug available in the U.S, which brought him to the brink of death. To survive, he smuggled non-toxic, anti-viral medications from all over the world, but yet still illegal in the U.S. Other AIDS patients sought out his medications forgoing hospitals, doctors and AZT. With the help of his Doctor, Eve Saks and a fellow patient, Rayon, Ron unintentionally created the Dallas Buyers Club, the first of dozens which would form around the country, providing its paying members with these alternative treatments. The clubs, growing in numbers and clientele, were brought to the attention of the FDA and pharmaceutical companies which waged an all out war on Ron. “DBC” follows Ron Woodroof’s personal fight to survive which lasted 2191 days when he died on September

Part of the blurb is interesting to me because it says that AZT brought him “to the brink of death.” I don’t know how this was handled in the film, but I have seen this before. I do know that if someone is in full blown AIDS and their T-cell count is that low, they run the risk of going into what’s called IRIS when they start taking AZT…or any HIV drugs. It can be very dangerous, which is why it’s important to find out early if you are HIV positive. When people are in full blown AIDS, which nowadays means they’ve waited too long to get tested for HIV, and they start taking HIV drugs the symptoms they have only magnify and get worse sometimes, which can either kill them or bring them back to life. A lot of the time it depends on the doctors and how the patients going through IRIS are being supported. This is also why if you are HIV poz you want to get a good Infectious Disease doc who knows what he or she is going…usually associated with a university teaching hospital if you can.

Immune reconstitution inflammatory syndrome (also known as “Immune recovery syndrome”[1]) is a condition seen in some cases of AIDS or immunosuppression, in which the immune system begins to recover, but then responds to a previously acquired opportunistic infection with an overwhelming inflammatory response that paradoxically makes the symptoms of infection worse.

I don’t know much about Ron Woodruff because I was too young back then to remember a lot of these things. Most of what I do remember about AIDS was directed toward gay men and not the straight community. Though I do remember hearing about The Dallas Buyers Club, I don’t remember much because it didn’t seem to be something on which the media focused back then. It sounds to me as if the film is going to focus on how the FDA and the government went against what Woodruff was doing with the club which isn’t something that surprises me at all. The one thing I do remember about the l980’s and AIDS as young as I was is that very few were willing to speak up about AIDS and offer support. The government, during the Reagan years, did the least for people with AIDS. It was as if AIDS didn’t exist at all, and that alone is a travesty. Unfortunately, it seems to be the case once again with how the government ignores marriage equality and we are forced to lobby state to state, and I guess some things don’t change all that much no matter who the President is.

But, in spite of government, a lot of people worked hard to help people with AIDS back then and I’m hoping this film gets into this in depth. Hollywood doesn’t make films like this often, but when they do I usually find them to be accurate. And from the way Mcconaughey prepared for this film from a physical POV, it seems as if they are going for accuracy this time instead of fluff. I do know this, it won’t be easy to watch.