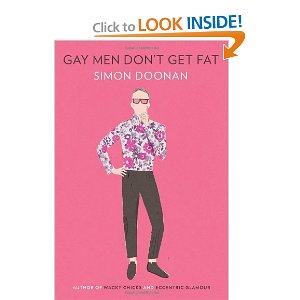 I’ve been a huge fan of Simon Doonan for a long time, and I don’t think I’ve ever posted anything about him here. I realized this while I was reading the latest issue of Architectural Digest last night, when I spotted a feature with Simon Doonan and Jonathan Adler where he referred to Adler as his “husband.” Not his partner or lover. But his husband. 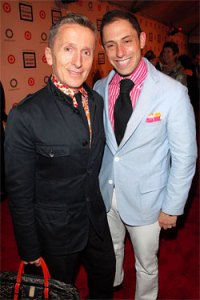 I thought that was nice. Living in Bucks County, PA, where gay marriage is not legal and probably won’t be legal any time soon, I refer to Tony as my partner…even though in every sense of the word he’s my husband.

But more than that, I’m also a fan of Simon Doonan’s books. My favorite is “Gay Men Don’t Get Fat.” The book parodies the old diet book, “French Women Don’t Get Fat,” with a balance of wit and humor. And at the same time delivers a message.

As an author, Doonan’s titles now number five. This latest is a parody of Mireille Guiliano’s 2004 hit French Women Don’t Get Fat. As usual, it captures Doonan’s stylishly wacky sense of humor. It’s a fun read, journaling a life filled with fun twists, and teaching us all to have a little more taste!

I don’t think this is an exaggeration. In the AD article I read last night Simon and his husband painted their home on Shelter Island black. The home is the epitome of style. He explains why they painted it black in the article, and I couldn’t agree with him more. I’ve seen it done before and it’s a very nice look if done correctly. Oddly, though Adler and Doonan’s home is modern, black or deep charcoal works well with even older more historic homes.

Based in New York, Doonan wed husband Jonathan Adler in 2008. Adler, of course, is famous in his own right as an interior design expert and potter. The couple are besties with designer and native Texan Todd Oldham, who actually gave Adler his first experiences in the production of fine pottery art.

Though I don’t know Doonan or Adler personally, I know gay couples like them I would never mention by name. I’ve met them in The Hamptons and in other places like South Beach. And I base many of the characters in my novels on them. One of the main characters in “Pretty Man,” Roland, was loosely based on a handsome gay CEO of a huge corporation who lived about a mile down the road from me. It wasn’t unusual to hear his helicopter late on a Friday afternoon.

But I digress. If you’re looking for something fun to read, check out “Why Gay Men Don’t Get Fat.” Like I said, it’s not only funny but also filled with insight about gay culture and humor we tend to miss in the ever so serious world of Internet publishing.