Those who follow this blog know I don’t usually post too much personal info, and rarely any photos. But I’ve been posting about gay marriage since I began this blog about six years ago and I would be highly remiss if I didn’t at least post a few photos of my own marriage…and talk about a few points I think might interest a few people.

First, when Tony asked me in December what I wanted to do as far as wedding plans go I said I wanted to keep everything very simple and quiet. Even though the significance of getting legally married trumps almost anything for me, I still didn’t want to make a huge thing of it because we have been together for twenty-one years. So Tony found an inn in Northern Vermont called Phineas Swann that looked perfect. And it was perfect. They have a wedding package, the rooms are wonderful, the town of Montgomery, Vermont is magical, Phineas Swann is pet friendly, and I could go on forever about how great the entire wedding was thanks to the town of Montgomery, VT and the owners of the Phineas Swann Inn…Lynn and Darren. After a long seven hour drive up there on Monday in constant snow…with two dogs…they made us feel welcome, and never took the reason why we were there in the first place for granted. So if you are straight or gay and you’re looking for the absolute perfect place to get married quietly, I would highly (five star) recommend Phineas Swann in Montgomery, VT. (And I swear I did not get a discount to plug them this way.) Tony and I have stayed in many inns and B&Bs on Cape Cod and none could compare to how wonderful these people are at Phineas Swann. They left nothing out, from rose petals on the bed to chocolate covered strawberries near the fireplace.

Even though we wanted a quiet, simple wedding, we wound up being part of a documentary on same sex marriage completely by sheer accident. Film producer, Jeff Kaufman, from Floating world Pictures was looking for a place to shoot a few scenes in Vermont, with Vermont Supreme Court Justice, Beth Robinson, and he chose Phineas Swann at random and it just happened to be the week we were getting married. When Lynn from Phineas Swann called us a few weeks ago and told us Jeff Kaufman wanted to film us we did hesitate for a moment, but when we found out Vermont Supreme Court Justice, Beth Robinson, would actually be performing the marriage ceremony we agreed immediately. Robinson was one of the first to help legalize civil unions in the country and that in itself was an honor. The documentary, “The State of Marriage,” is equally important to same sex marriage and Tony and I both decided we wanted to be part of making history in our own small way. I’m also huge believer in fate, and the fact that none of this was planned made it even more significant…and emotional. There was a time back in 2007 when I truly did think Tony was going to die and we would never get the chance to marry legally. In those darkest hours that I find hard to even describe I never would have dreamed we would have a wedding like this. When you’re sitting in an ICU in the hospital nothing really makes much sense.

But make no mistake about it. The main focus at all times was the wedding. Beth Robinson made this clear during the ceremony, and Jeff Kaufman respected it and he was nothing but gracious. The crew were some of the nicest guys I’ve ever met. And oddly enough, though we were a little nervous about being filmed that way, once the ceremony began and Beth Robinson started speaking, it was as if the film crew wasn’t even in the room. There was so much emotion I had to really work hard to hold it together. I’m usually a very stoic person, but this time the emotions were running wild.

I will post more information about “The State of Marriage” documentary in the future as I get it. From what I gather one main focus will be on Beth Robinson and all she’s done for LGBTI people and equality. Other than that, it really was a nice quiet little wedding in comfortable surroundings in one of the most beautiful places in the US. Even going to the town clerk and getting the marriage license was a great experience. And it’s something Tony and I will both remember for many years to come, with love.

Here are a few photos, taken by Darren on my iPad. One of the perks we got for agreeing to be in the film was a video of the ceremony, which I don’t have yet.

During the actual ceremony, with Beth Robinson and the owners of Phineas Swann, Lynn and Darren.

After the ceremony, with Beth Robinson, cutting the cake. 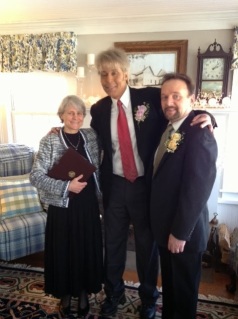 Me trying not to tower over Beth Robinson and Tony

Talking to the guys in the film crew about our vows.

Filming during the ceremony that I didn’t even realize was happening until I saw this photo.

A very tired red poodle sleeping in our room at Phineas Swann after a very long drive.

A flower arrangement sent from an old friend, Literary agent Harvey Klinger, who has always been very supportive of us.