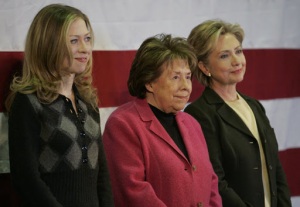 It’s never easy, no matter how old the parent is who passes away.

Clinton canceled trips to London and Turkey Monday in order to stay by her sick mother’s side in Washington, D.C. and was with her when she passed away.

“She was – a warm, generous and strong woman,” the Clinton family said in a statement, “an intellectual; a woman who told a great joke and always got the joke; an extraordinary friend and, most of all, a loving wife, mother and grandmother.”

Despite her daughter’s public life, Rodham stayed largely out of the spotlight, granting only one televised interview, which aired on the Oprah Winfrey show in 2004.

Rodham, who has been living with her daughter outside of Washington since 2006, fell ill Monday night. She died at Georgetown University Hospital surrounded by family, according to the Clinton family’s statement.