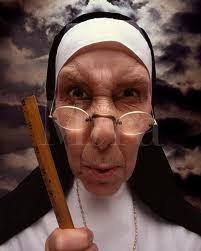 I have a nephew who is always posting different photos on social media, usually facebook. And each time he posts a photo there is always a caption that reads like this: “Me and my friend,” or “Me and my Mom.” Of course it’s grammatically incorrect. And this particular nephew is 29 years old, he’s a doctor, and he’s well above average in the IQ department. If he’d gone through 12 years of Catholic school like I did, Sister Unforgiving in the photo above would have smacked his fingers with that ruler.

But my nephew is not the only one I see doing this on social media. To be honest, I’m often tempted do to it myself just to see if I could get away with it. When it comes to social media, from blogging to facebook to twitter, I’ve always believed it’s supposed to be casual and free from grammar police. I also believe that language, grammar, and communication in general change and evolve with time. And when more people use something that’s normally considered grammatically incorrect, it might be time to change the rules a little. Ending a sentence with a preposition is a good example. There was a time, not too long ago, when it was considered wrong to end any sentence with a preposition. Now it’s done all the time, it’s perfectly acceptable, and it’s the way people actually speak. Communication evolves; some of the things we thought were important two hundred years ago don’t apply anymore.

So I don’t mind when I see these small grammatical errors on social media. I don’t mind when I see huge grammatical errors on social media either, because this is the way people speak on a daily basis. And, the key word here is “social.” We’re not talking about “educational” media. We’re not talking about “bore-me-to-death” media. I think this is especially true when it comes to personal blogging. Nothing irritates me more than when I see a fool correct someone’s grammar on a blog or social media…or on a comment thread. It. Doesn’t. Matter. It. Is. Casual.

And yet I see it all the time, especially with regard to authors, editors, and publishers. There are people who must seriously believe that because authors, editors, and publishers work on books where grammar should be excellent at all times they don’t deserve a break on social media. Most of the time it’s the smallest mistake that people will single out and mention, in public, to the author, without giving it a second thought.

Personally, I think it’s highly inappropriate to correct someone in public, on social media, with regard to grammar. I don’t care what line of work they do either, and this includes authors or anyone connected to publishing. To correct someone in public on social media is basically the same as correcting someone’s grammar at a cocktail party. It’s bad manners, which is far worse than poor grammar. I tend to believe the people who do this on social media are also the same types of people who would do this at a cocktail party (I’d bet most don’t get invited out often).

Unfortunately, the people who do this all the time probably won’t even read this post. They will continue on, correcting people on social media, boring us all to death with their snide tongue-in-cheek comments and we’ll have to ignore them. But if someone does, indeed, correct you on a blog or any other social media, don’t worry. Don’t give it a second thought. Because this is not someone you need to care about or know.