Category: how tony and I spend gay pride 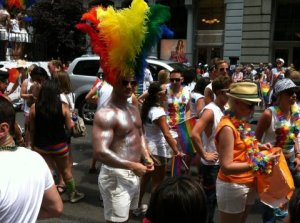 First weekend: we put on lipstick, earrings, and high heels. Then skirts and camisoles. After that, we both grabbed a picnic basket, a rainbow flag, and skipped over to our local m/m romance learning center for a lecture on what is and what isn’t considered “Gay Literature,” given by a fascinating woman who swears she knows it all when it comes to “Gay Literature.” Oh, by golly gosh, it was an exciting weekend to be sure. On Sunday afternoon, we wound up braiding K.Z. Snow’s hair and painted Cat Johnson’s toenails tipsy pink. (I love them both to death; I’m sure they know I’m only writing in jest.)

But seriously, this is what we really did all month. And take into consideration that we have our own gay pride in our own community that lasts a week in May. So it’s not as if we don’t support gay pride or the historic significance of gay pride as an event. We do have respect for it. We just don’t like to turn it into a promotional event so we keep a low profile. In fact, as an author I make a point of not turning gay pride month…or week or day…into a promotional event for my books. That would be declasse.

The first weekend of June we drove down to Washington to visit a gay couple we’ve known for fifteen years. They’ve been together for twenty years just like we have and we don’t get to see them often. On Saturday evening the four of us went to a fundraiser somewhere in a Washington suburb. After that, we returned to DC and went to clubs on Dupont Circle. For those who have never been to a club there, let’s just say it’s a very revealing experience in a literal sense. In one club, we ran into our high profile politician friend who has a weekend home in New Hope…a gay Democrat, not Republican, who is very much in the closet for personal reasons I respect.

The second weekend in June we drove out to Fire Island to visit my brother, who also happens to be gay. We don’t see each other often unless it’s a family event and we usually plan these things way in advance. I’m not a huge Fire Island fan because I get bored on beaches and I prefer to drive up to restaurants instead of walking to them. But we had fun in spite of my complaints. And trust me, we saw plenty of gay pride on Fire Island. If you haven’t been there, it would be hard to describe on a pg rated blog.

The weekend after that I spent the entire day on Saturday dealing with my home. For the first time in two weeks I had a chance to mow and manicure…which is something I normally do every weekend in the summer unless we’re away. We have three acres of very difficult property. The previous owners wanted a modern home with a limited plant palate and I’ve continued their original landscape design. On Sunday of that weekend we drove to Tony’s dad’s house and spent father’s day with him. I took the day off on Monday that week and we drove to my dad’s and spent a belated father’s day with him.

Yesterday…Saturday…we drove over to Tony’s other sister’s home in Doylestown, PA, for a farewell party the family was throwing for Tony’s younger brother. He and his family are moving out to Utah permanently and we knew it was the last time we would see them for a long time. Very emotional. But I did order (I don’t bake, thank you) a cake with gay pride colors.

And today I worked on my property again.

Next weekend, the last weekend in pride month, June, we’re driving to my other brother’s home in New Jersey to celebrate my nephew’s eighth grade graduation. On Sunday, if we’re lucky, we might just figure out a way to go to tea dance at our local gay bar and spend a little time with gay people.

Of course…aside from braiding K.Z. Snow’s hair…everything I listed above was about as derring-do as a hemorrhoid. But this is what two gay men do when they’ve been together for twenty years. They have professional, social, and family obligations that can’t be ignored. Tony and I both have a great deal of respect for the concept of gay pride as an event, but at this point we are living gay pride every single moment of our lives and we don’t necessarily need an event to remind us.

Gay pride isn’t just a month, a week, or a day for us. Gay pride is a way of life. We don’t use it to promote anything other than pride itself through our actions, and we’ve always been there to offer support both financially and physically to those who need it. The odds are you won’t find us marching in a parade or wearing feathers and rhinestones, but we are…just like the majority of other gay men like us…trying to do it in our own way.