As I said in an earlier post, THE GHOST AND MR. MOORE hasn’t been released yet. But there is a chapter in this book that’s devoted just to Halloween in Provincetown. I’ve been there personally, so I know what Halloween in P’town is like. The streets are filled with people dressed in almost every costume you can imagine and the only people who stand out in the crowd are the ones not wearing costumes.
So here’s a brief excerpt from one of the Halloween scenes in the book:
Dexter got up from the bed and crossed to the front door. The high heels clicked against the hardwood floors. They weren’t chunky heels, but they weren’t stilettos either. They were in between, and slanted forward. “You’re not going out to frighten people on Halloween?” he said. “I thought that’s what ghosts were supposed to do.”
Lang smiled and waved his arm. “Please. Do I look like an amateur?”
Dexter looked into his eyes. It was a serious look; his lips were pressed together. He said, “There is nothing, absolutely nothing, amateur about you, Captain Lang.”
After that, he went downstairs so he could take Brighton trick-or-treating. She was already out on the front porch with a few of her friends. Since Dexter and Elliot were wearing costumes that night, they had volunteered to escort a few of Brighton’s friends around town. The other parents were thrilled. A lot of the parents in town worked at night in restaurants and the kids would have had to stay home if they hadn’t volunteered.
Kellan and Paige were on the front lawn because they were following everyone into town to film the entire evening. They weren’t wearing costumes. But Elliot was sitting on a wicker chair with his legs crossed at the knee. He was wearing a campy version of a Marilyn Monroe costume he’d rented in town from a drag shop. When Dexter saw him, he couldn’t stop laughing. The red lipstick was smudged; his fake breasts were crooked. Elliot hadn’t even bothered to shave his legs, and he was wearing those awful low-heeled pumps old ladies wore. They were a size too small. His huge, wide feet were bursting from the sides. 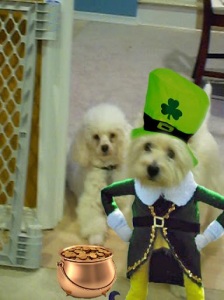 Typically, I don’t dress my dogs up in anything. I know they don’t like it, and I don’t like to force them into doing things they don’t like. When I rescued Lex, she came with a shopping bag filled with doggie clothes from her previous owner. The first thing I did was donate all the doggie clothes to my local SPCA, along with the bag of awful dog food there were feeding the poor thing.

But this weekend my nephews thought it would be funny to put Halloween costumes on the dogs. The one on the left without a costume is mine, the one dressed as a leprechaun is my mother’s dog, Emma. And if you knew Emma, you’d know how much she hates this sort of thing. She is the female version of “Marley,” in the book and movie, “Marley and Me,” and there’s nothing dainty or delicate about her.