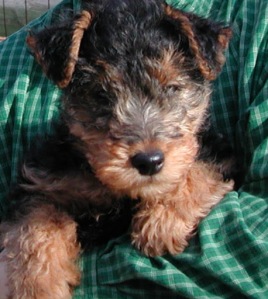 Last December I posted about good friends of mine in publishing who had an eleven year old Scottish Terrier named Ginger and she wasn’t doing well. After tons of treatments, and more set-backs than anyone ever imagined, she finally passed away and my friends were devastated. Needless to say, it was a long, long winter.

But I just came back from their Carversville home, where I met the newest addition to their family. He’s a four month old, extremely frisky, Welsh Terrier named Whiskey. And they couldn’t be more thrilled. Of course nothing can ever replace Ginger, but life does continue to move forward, and we all have to move right along with it, creating our own happy endings wherever we can get them.

I’ve been posting about my publishing friend who is in Key West right now for a couple of weeks. He’s been through hell this past year trying to get his twelve year old little scottie, Ginger, well again.
But I guess this time it was all just too much. She passed away last night, in his arms, after trying to rally back from kidney failure.
This, I swear, is the only hard part about owning a pet. They just don’t live long enough!

I have a very good friend who works in publishing and divides his time between New Hope, New York, and Key West. And he has an eleven year old Scottish Terrier named Ginger who has been going through a rough time.
First, the poor thing has chronic hepatitis and she’s been living with that for over five years, which means my friend has to cook special meals for her just to keep her alive.
And, as if that wasn’t enough, this summer she was diagnosed with cancer of the mouth and just went through major surgery to have the tumor removed.
The surgery was successful and for the past few months she’s been recovering fine, however, she went into kidney failure last week (for no apparent reason) and she’s been struggling hard to get through it.
And my friend is absolutely devastated. He loves this dog like he’d love his own child if he had one, and he’s been there supporting her all the way. In fact, I’ve never seen such a devoted pet owner in my life. He’s not Donald Trump, but he’s selflessly spent a small fortune on vet bills since last summer. I know. I have two dogs and just going for a check-up is never less than two hundred dollars.
So I’m hoping Ginger goes into a full recovery, for her sake and for the sake of my friend. They’ve been through so much it this past year.