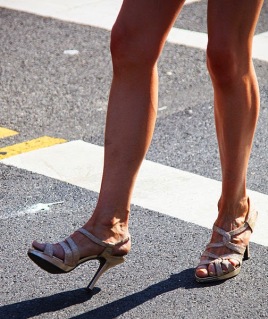 Here’s something interesting I read about a man who is proud to be a genderqueer professional. I’ll post a definition of genderqueer below for those who might not know what it is yet. But the gist of this article is all about taking control of your life and circumstances and living with pride.

Of course most of us are self-conscious to a certain extent about what we wear and how we’ll be perceived, but in this case I would imagine there are so many emotions running rampant that feeling is magnified ten fold.

There’s a photo of him, and an example of what he wears.

This is how Wiki explains the term genderqueer:

Genderqueer (GQ; alternatively non-binary) is a catch-all category for gender identities other than man and woman, thus outside of the gender binary and cisnormativity.[1] Genderqueer people may identify as one or more of the following:

I think it’s wonderful we’re reaching a point in society where people can express themselves this way.

And let’s face it. Traditional men’s clothing is just plain boring. Men dressed with more creativity hundreds of years ago. Men have had nothing but the boring business suit since the beginning of the twentieth century and I think it’s time that changed a little.

Of course Disney World is not doing anything perverted. They are welcoming gays with something called “Gay Days,” and some of the more conservative types are going BERserk again.

“The homosexual agenda is planning to once again descend upon Disney World in Orlando, Fla. to expose your children to far more than Mickey Mouse and Space Mountain,” Porter said, before adding that “cross-dressing men will be among those parading public displays of perversion” at the theme parks.

First, I’d like to know more about this “homosexual agenda.” I hear it all the time, and I even had one book reviewer accuse me of promoting the “homosexual agenda” over at allromanceebooks.com a few years ago. I can’t remember which book, but I get that kind of thing all the time and I’m not even a real activist. I just write old fashioned smut.

Second, last I heard some straight men are considered cross-dressers, too. I’m not an expert on the topic but I looked it up and wiki says it’s not implying “any motives,” with regard to sexuality.

The fact is there is no “agenda.” It’s only about the same equal rights that every straight person has in the US. That’s it.

You can read more about Disney World here. I’ve never been there. It’s not my thing and I try to stay away from little children as often as possible because they tend to get things sticky and they scream a lot for no apparent reason. And, you’re not allowed to give them martinis. But I have a younger brother who loves Disney World so much he took his first wife there for a honeymoon, and then divorced her and took his second wife there for their honeymoon. He recently bought a time share there.

Update: I wanted to update this post because a friend of mine…someone I know personally in real life…just returned from Disney World and he mentioned a few interesting things about gay days. I’m paraphrasing now, but according to him gay days aren’t what you might expect…or they aren’t as gay you might think. He didn’t see any rainbow flags, pins or signs anywhere. He said he felt like the most daring gay man there because he wore Minnie ears on his head the entire time. So it’s not exactly Commercial Street in Provincetown with bare-chested circuit boys. In fact, my friend wasn’t even sure what the gays were doing…most of them wearing red shirts. Other than a rainbow Mickey Pin, he didn’t see one single person in drag. And if that’s considered perversion, we’re all in trouble.

I’m posting about this because it’s a damn great book, and to show how digital books have changed the world of writers in so many ways. I have a good friend who is an author and his books have been out of print for some time. He was recently asked to re-release them in digital format and he’s enjoying a brand new audience more than thirty years after the first release date. That would not have happened at any other time in the history of publishing.

The book is titled, Cable Harbor, and the author’s name is Donald Bowie. I’ve read it and loved it, and he has another one coming out soon. Some of the one-liners in the book are priceless…and this author invented snark before snark was even a word.

In any event, here’s a link to Untreedreads.com.    Here’s the Amazon link as well. It’s a fun read.

And here’s the blurb…

A scandalous, gossipy, breezy satire, CABLE HARBOR follows the antics of a familiar cast of characters through one sizzling summer in a small resort town in Maine. We meet Marie, a rich middle-aged divorcee hell-bent on getting even with her ex; Arthur and Herbert, Cable Harbor’s resident gay couple and the happiest marriage in town; Marjorie, wife of the local caterer and an ardent crusader against the corrupt summer people; and Laura, in her twenties and recently fired from a New York publishing house.

Some are bored, some are lonely. But the vacationers at Cable Harbor know that though money can’t always buy love, it can certainly make misery more enjoyable. Cavorting at the beach club, sipping vodka and lemonade…the idle rich while away the days…until the townies, disgusted with the summer folk’s indolent ways, declare open warfare.

Donald Bowie’s bristling wit captures the craziness that overcomes us all in the summertime. CABLE HARBOR will strike a familiar chord in anyone who has ever packed a bag for the beach in search of warm days and warmer nights.