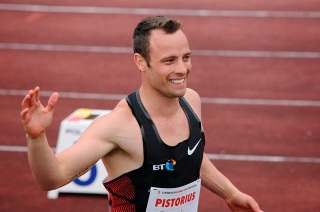 One of the most publicized trials since OJ Simpson is about to begin its defense. Nothing about this case has ever been simple, not from the start. And, it varies significantly from the OJ Simpson trial because Pistorius admittedly shot because he thought his life was in danger. It’s also a bench trial, which means no jury.

For five days, Oscar Pistorius endured a withering cross-examination at his murder trial from a prosecutor who pounced on apparent inconsistencies in his testimony. Yet, legal analysts said Tuesday, expert witnesses who will testify for the defense could undermine the prosecution’s efforts to prove Pistorius killed girlfriend Reeva Steenkamp on purpose after an argument.

The demeanor of the Olympian, often fumbling for answers and occasionally breaking into sobs, contrasted with that of prosecutor Gerrie Nel, who called Pistorius a liar and unleashed volleys of barbed questions. Social media buzzed that Pistorius is in deep trouble – a South African talk show host wryly observed that the double-amputee runner had not “covered himself with glory” when his cross-examination ended Tuesday – but experts said the trial has a long way to go.
You can read more here.
I also think this is one of the saddest trials in history because of the life lost and the lives ruined. It’s actually very hard to listen to Pistorius being questioned because the sobs are so gutting.
Gay Retirement Home Spain
In an effort to help gays from returning to the closet as they grow old, Spain has come up with a gay retirement home. (I’ve never actually heard of that…returning to the closet.)
The project is an attempt at stopping Spain’s elderly LGBT population from returning to the ‘closet’ in old age.
‘They don’t have children and grandchildren they can talk about and often they conceal their sexual orientation to avoid rejection,’ Federico Armenteros, president of 26 December Foundation, said.

They are making it clear that the home is open to everyone, not just gays. We have several things like this here in the US and it’s important to make this distinction because to call a place an all gay…or gay only…retirement home is discriminatory.

I don’t plan to retire, not ever. There will be no condo in Wilton Manors for me, or small house in Palm Springs. I’m a writer, and I’m not fond of the concept of “gay ghetto.” I just plan to expire quietly.

Transgender activist and actor Chaz Bono dropped by RuPaul’s Drag Race to help contestants learn to conduct a celebrity interview and in the process, opened up a bit about himself.

‘You know, there was a number of years where I knew I was transgender but was afraid to do anything about it,’ Bono told one of the contestants.

I think (hope) we’ll be hearing more about female to male transgenders in the future. If Chaz felt that way I can’t even imagine what it’s like for someone living in less sophisticated circumstances.

In any event, Chaz was on RuPaul’s Drag race. And I wonder if that has anything to do with the recent kerfuffle they’ve had over transgender terms and phrases. I’m starting to wish someone would come up with a good solid web site where I can go to make sure I’m not saying or writing anything politically incorrect that would offend anyone. The other day someone asked me if the term “Drag Queen” was appropriate and I just shrugged and said I never use it because I believe in playing it safe. I stick to female impersonator at all times.