I can’t seem to find an exact date for when openly gay actor Matt Bomer will guest star on “The New Normal,” but I’ve read it’s going to be the last episode. I hope it hasn’t already aired. My viewing habits with TNN are sporadic these days, and I’ve posted why a few times about this in the past. This link will show you why I’ve haven’t been following it regularly.

In other words, I’m still on the fence about it. And the main reason is that I don’t think it always represents all gay men the way it should. I also wish they would concentrate more on the comedy and general storylines without the constant political/social commentary that’s become so cliche with certain groups of gay men. While I do know gay men who are like the characters on TNN, I can tell you with absolute certainty that Tony and I don’t walk around talking politics 24/7, we don’t walk around talking gay issues 24/7, and we don’t wear the gay chip on our shoulders the minute we’re out in public with the rest of the world. And neither do most of our gay friends. Being gay doesn’t define us. It’s part of who we are and we don’t hide it, but it’s not the only thing we are.

I’m not the only who would feels this way about TNN:

The New Normal has often made attempts at making emotional connection to its viewers. It would do well by being a creative comedy show that tickles the mind instead of a social commentary poking at the wrong doors.

One of the things that still surprises me is that I get so many e-mails from readers that feel isolated. I could sugarcoat what I write on this blog like other m/m fiction authors and only tell you about the “great, new, exciting” things happening. But I would be remiss if I left out some of the reality. These are gay men who are still in the closet for various personal reasons and aren’t sure quite what to do about it. On the one hand, if they were to come out of the closet they know they would be leaving the lives they’ve always known behind. On the other hand, they are intimidated by what they see on TV shows like TNN because they just can’t identify with the ultra liberal gay who wears tight shirts, red pants, has that little tuft of hair combed to a point above his forehead, and speaks like Paris Hilton.

I heard one story recently where a gay man left his home for a weekend to spend with an old friend he hadn’t seen in years. It turned into a frustrating experience because the old friend turned out to be gay, and this old friend wound up bullying the closeted gay man, insisting he had to come out of the closet. The closeted gay man ultimately wound up going back home to the safety of what he’d always known…completely confused. And that’s only normal. In fact, that is the NEW NORMAL. My advice was to sit back, let it all sink in for a while, and don’t let anyone bully you into anything you aren’t ready to do.

But I’m not completely against TNN either. And I’m sure Matt Bomer will be wonderful and I’ll most likely be watching. I think it’s wonderful there are TV shows like this now and it’s wonderful that some gay men can identify with them. I have gay friends who literally swoon when they see a photo of President Obama. Now I’ve always been a registered Democrat, and I’ve always leaned to the left on most issues, but if you think I’m going to swoon for any politician you have another thing coming. And I just wish that we’d see a TV show where gay people weren’t always portrayed the same way, and in the same respect really make them the new normal. If you were to take any old storyline from an episode of I Love Lucy and make Lucy and Ricky two gay men…or even two lesbians…and you left out the politics and social commentary, I know for certain you’d get a show that would work. That in itself is a social commentary because it shows instead of tells. And that’s exactly what I’ve done in the past by parodying straight films like “Pretty Woman” with erotic romance. 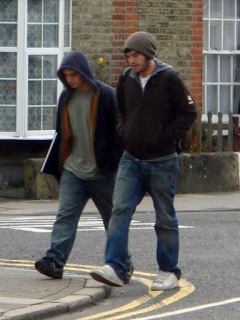 I wanted to write this post and leave it up for a long time for a reason. I’ve been talking to a friend who is in the closet and I’ve been listening to him tell me how he’s being bullied and talked down to by another gay person who thinks he knows it all. There’s not much I can do and it’s frustrating.

I’ve seen this before. Unfortunately, there are some gay people who feel the need to push the idea of coming out on everyone that crosses their paths. And I don’t think that’s fair or healthy. Gay people who are in the closet tend to be more vulnerable and they begin to question themselves and every single aspect of their lives and the choices they’ve made. That’s enough for anyone to handle without being bullied by other gay people. They need time and patience; not intimidation and bullying.

So this blog post is an open forum for anyone who has ever been bullied by another gay person. Whether it’s politics, coming out choices, or relationship oriented, please feel free to comment and vent anonymously. You can rant, curse, and scream. I don’t care. I have no way of ever knowing who you are and neither will anyone else. I don’t track IP addresses and have no interest exposing anyone’s identity. So if you need to vent, feel free to do it here.

I won’t even jump into the comment thread with my own opinions. It’s just a place for you to express how you’re feeling, and maybe someone else might read it and help you feel better.