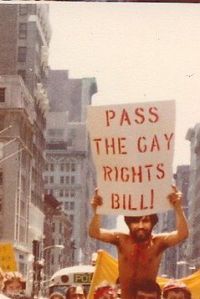 I wanted to update my post about legalizing gay marriage in NY. Since then, I’ve had a variety of e-mails from friends all over the country with interesting opinions. An old friend in Palm Springs posted this photo from his days in New York. I love it because I was only 8 at the time and I missed all these things.

Here’s the caption: This picture was taken of me in NYC for the Pride March in June 1978. We marched up 6th Avenue then. (We were not allowed to march up 5th Av. thanks to the Catholic Church). The placards we were holding were for the city of New York to pass an anti-discrimination bill for housing and jobs for gays and lesbians. We have come a long way since 1978. We still have far to go, but tomorrow will be an incredible day in New York.

The one thing everyone agrees on is this is a good thing. It’s a step forward toward equality on a federal level, and a lot of people worked hard to get it passed.

And on a romantic, emotional level, there aren’t words to express how gay couples in NY feel about being able to validate their relationships. Many of the gay characters in my books get married, in spite of whether it’s legal or not. I’ve been to tons of gay marriages myself in the past twenty years, and although all these couples would have liked to have had their unions validated in a legal sense, they still wanted to get married anyway. And each celebration was filled with love and joy. And, more than that, all of the gay couples I know who got married are still married.

So there’s still a long way to go from a legal standpoint. My very legalese friends tell me there’s still a way to challenge this new law in NY…it has something to do with the way they bargained for it. Nothing would surprise me anymore. One day I thought marriage was legal in California, and the next it wasn’t. But for now, it’s a step closer to not only legal equality, but emotional and romantic equality, too.