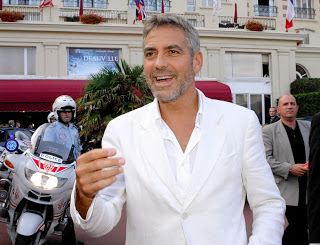 The other day I heard them talking about this on a morning show on TV and I earmarked a search to get more details. I read more, here. Aside from Matt Damon making 3 million dollars, which comes out to about $150,000 per second, the elderly actor, the bachelor George Clooney, is also in the ad but I didn’t see anything about what he was paid.

The article states Damon usually turns down commercial ads. You have to wonder, though, whether or not that’s about integrity or the fact that no one’s been dumb enough to meet his price until now. I really don’t mean to be snarky about this. Most people, including me, wouldn’t turn down that kind of money. But I posted a short time ago where I linked to something that stated Charlie Hunnam was only supposed to get paid $125,000 to play the part of Christian in the 50 Shades movie (I double checked the link and it’s still only $125,000). And now Damon’s getting 3 million for a coffee ad that will be aired in the UK, not the US.

The ad focuses on Clooney’s ­famous charm and irresistibility, showing him being snubbed by an attractive woman who would rather drink her coffee alone. “George Clooney’s inside,” she yells, causing a mob of women to chase after the actor and leave her in peace.

Then, in a shorter complement to the ad, Clooney uses the same ploy to enjoy his own coffee, drawing the frantic females’ attention to the presence of his old friend Damon.

Isn’t that rich, all you “frantic females” out there. Clooney’s famous charm. The bachelor Clooney isn’t hawking his convoluted politics now, he’s hawking coffee. I’m sure he’s not worried about his health insurance being canceled. I wonder if he even checked out the government healthcare web site.

Aside from how blatant this all is during a time when most people in the US are scrambling to figure out how they are going to pay for health insurance after the recent cancellations thanks to the so-called affordable health care act, I can’t help but remember all those old TV sitcoms where Hollywood yanked our proverbial chains and gave us head trips where dumb sitcom characters would actually turn down commercials and money because they didn’t like the product. The Golden Girls did this once with a pizza commercial where Sofia hated the pizza so much she refused to finish the commercial based on principle. That’s right. Poor as a church mouse but she said no to the money because she had principles and integrity. It’s an old tired trope in TV sitcoms geared to fuck up our heads. Makes me wonder if the bachelor Clooney and Damon who is so good at playing gayface actually drink that coffee themselves.

In any event, you can read more here if your stomach can take it.

This afternoon I noticed Ryan Seacrest post an update on Facebook asking his followers about what they thought of the cover of Entertainment Weekly that depicts the actors who will play the leads in the upcoming Fifty Shades of Grey film adaptation, and the comments were more than entertaining. In fact, I couldn’t stop reading them after posting so much about the film over the past year.

Here’s a link to Seacrest’s FB update, with comments.

One person commented this way:

And the girl who plays Anastasia looks old and too pale in her skin. You’d imagine someone who had a clumsy look to her, but still attractive. This would ideally be Ashley Green or Blake Lively.

Should be interesting to see how this movie does when it’s released.