Foot Fetish News: Put An Onion In Your Sweat Sock

2018 is starting out to be filled with information. I don’t have a link to this. I’m sure there is one somewhere, but I saw it on social media and I’m only sharing what I saw.

Some claim that if you put an onion slice in your sweat sock at the bottom of your foot before you go to bed at night you’ll wake up feeling wonderful, you’ll clean your blood, you’ll have more energy, and you will heal almost anything that’s wrong with your body. The onion slice I saw the guy putting into his sweat sock was about one quarter inch thick. But they didn’t say if size matters in this case.

And, best of all, the next morning your feet will even smell better than before.

I’ll try it and get back. You never know.

It’s funny because we’ve been watching the newest season of Black Mirror on Netflix and we basically said the same thing last night before I even read about this “outrage.” You’d think a show like this with this kind of content and so many story lines set in the future there would at least be some LGBT characters.

However, fans are disappointed in the release of season five as it fails to include any LGBT storylines.
It was hinted that episode four, Hang The DJ, would include some representation but a fleeting five seconds of lesbian action disappointed viewers.
That’s the episode I saw last night, and I said the same thing. You can read more here.
You know, it’s not that we are demanding everything to be LGBT. We know we’re a minority and we’re used to that. But at least give us some content.
Tweet About Why It’s Exhausting To Be Gay
Some gay writer with a good publicist I never heard of tweeted this on New Year’s Day and he’s getting attention for it…although I’m not sure why.
Being gay is exhausting!! You have to have an encyclopedic knowledge of every quote, scene + facial expression from every single female celebrity, pop-culture icon + fictional character over the last 20 years AND know exactly what to type to find them in GIF form! I’m so TIRED.
If I ever get exhausted for being gay…which I don’t…it’s because of this kind of stupid tweet. I don’t care about female celebrities, I don’t have a female pop culture icon, and I care even less about what other gays consider icons. Sorry to ruin anyone’s stereotype of the gay male pet poodle. But that’s the truth.
You can check this out here.  Thankfully, the several people in the comments agree with me this time.
Retired Gay Priest Left Homeless
This is about a 79 year old retired gay priest and his 24 year old “male model” husband. The 24 year old doesn’t look like male model material to me, but I guess that’s debatable. This is actually a serious issue and it happens to older gay men more often than not. I’ve seen it. I actually saw it happen to an older gay couple who took in a third lover. The third lover wanted them to put his name on the deed. He was much younger.
The priest met the alleged model on a dating site, the priest married him, and then the priest signed his home over to the alleged model to protect the alleged model’s future. And this happened…
Marin broke things off just weeks after the apartment was put in his name, and Clements found himself homeless and relying on friends to put him up. He regrets turning over the property to his sugar baby.
“It was of course foolish, it was heart over head, it really was a silly thing to do and giving him the property was a silly thing to do in retrospect,” he told The Daily Mail.
The rest is here. The 24 year old alleged model is now with a 48 year old. Interesting. You’ll want to check out the comments.
The Projector by Ryan Field
Here’s the Amazon link 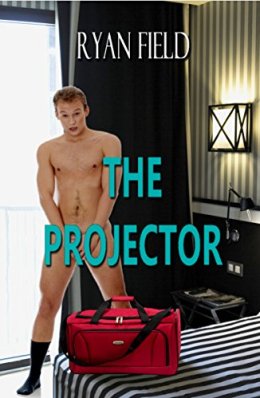