Before I begin, I’d like to state that I still stand behind my review of “Fairytale Interrupted,” by Rosemarie Terenzio, and I’d still recommend it to anyone looking for a good memoir.

Since I posted my review I’ve had more than a few e-mails from readers asking about whether or not the e-book version of “Fairytale” has photos. Most bios, memoirs, and auto-bios, do have photos, even the e-book versions. In the past year, I’ve read one about Julia and Paul Child, which included tons of photos. I’ve read one about Merv Griffin, with quite a few photos. Even the Steve Jobs bio had tons of photos. In some e-books the photos are inserted into the book and you see them as you read. In others there’s a separate section; just like print books. So I know it’s done the same way with e-books as it’s done with print books.

However, I only saw a few photos in the e-book version of “Fairytale.” To be honest, I enjoyed the book so much I didn’t even realize this until after I’d read the book. I was too busy with the content to notice. And then I left my reviews and people started to e-mail me about this. I went back and saw that there wasn’t a separate section for photos like most e-books. From what I recall, there were a few photos. But not a collection.

My first thought was that Ms. Terenzio either didn’t have any photos…I’m bad that way; I have very few photos; I hate to take them, and I can’t be bothered…or Ms. Terenzio didn’t want to release her personal photos. In many ways, I still get the feeling that she was protecting John Kennedy, just as she did while he was alive, while she was writing this book. Of course since the theme of the book was all about Ms. Terenzio’s dedication/loyalty to John Kennedy and George, it made the book even more endearing to me…and tasteful.

But I know a lot of readers want those photos. I’ll admit that I like going through them in non-fiction books, too. It was fascinating to see the way Steve Jobs looked as a young man and as an older man. So if anyone has a copy of the print book of “Fairytale Interrupted” out there, please comment and let us know if there are, indeed, photos included in the print version. I’m not the only one who is curious. Or just e-mail me privately and let me know.

I would hate to discover the print version of “Fairytale Interrupted” has a huge section of photos and the e-book doesn’t. This would be a huge #publisherfail, and publishers aren’t doing a great job with digital books, from pricing to marketing, as it is. 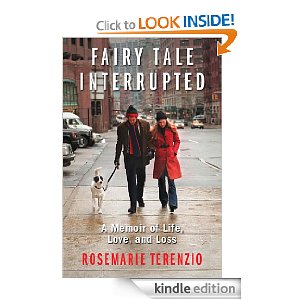 When I read excerpts of “Fairytale Interrupted,” in People Magazine last week I made a note to check it out. But when I went to Amazon earlier this week and read the only six reviews left so far I wasn’t too thrilled with what I saw. Almost half were one star reviews, with reasons why the readers didn’t like the book. The rest were rave reviews that sounded way to trite for my taste in memoir.

So I almost went against all the advice I give to readers about vetting reviews and books and passed on “Fairytale Interrupted.” I usually check out the information on amazon, but then go to Kobo to order the digital version because I have two Kobo reading devices and a Nextbook tablet. Part of the reason I almost passed was because of the questionable reviews, and part was because of the price…$11.99…which crossed my line when it comes to digital books.

So I opened the Amazon excerpt and started reading the prologue. I should also admit that I’m not a huge fan of prologues…anywhere…and usually skip right over them. This time, however, the minute I started reading I couldn’t stop. After the prologue, I read part of the first chapter. And after that, I went over to Kobo and bought the book. I wound up reading it in almost one sitting.

One reason the book resonated with me is because I felt close to the author in more than one way. I’m a writer who worked in publishing in the 1990’s as an associate editor, I lived in a small studio, and I remember the feeling of excitement within the publishing industry regarding the Internet. This was also pre-911 and Manhattan…and the world…was a different place.

Another reason the book resonated with me is because of John Kennedy. While I was still in college, I went into New York to visit my brother for the weekend. At the time, he lived on Manhattan’s Upper West Side, which was very trendy at the time. I’m not sure if Kennedy still lived there then, but a lot of celebs did and it was an exciting place to be for a few years. This is one of the reasons why I set my own book, The Virgin Billionaire, on the Upper West Side. We went to a small out of the way restaurant that weekend and I actually met John Kennedy for a split second. It wasn’t even an actual “meeting.” I was talking to someone about whether or not it was faster to go through the park to get downtown and he bumped into me and said he was sorry. I didn’t even know it was him, until my brother told me a minute later.

The book is not one of those tell-all, gossipy works that talks about things most people consider far too personal to discuss. But there are a great deal of intimate scenes between the author and John Kennedy that sound real enough to be absolute truth. The author is honest and you know she didn’t make anything up to sell a book. The integrity is there, and you can almost feel the loyalty and respect Rosemarie Terenzio felt for John.

It’s also very well written. As a writer it often bothers me when I see too many common mistakes…even in non-fiction. This book doesn’t do that. It flows with an even pace, it’s not too wordy or over-written, and I didn’t find as many mistakes in the digital version as I often find in other digital books. This alone is refreshing.

The title of the book is bittersweet. John’s life, and the author’s life, were fairytales interrupted. I could feel how devastated Ms. Terenzio was when everything changed so fast. And, even before I read this book, I always felt it was such a shame John didn’t get a chance to fulfill his goal with his Magazine, George. I used to read it from cover to cover. And if John hadn’t died so suddenly I believe George would have been what The Huffington Post is today on the Internet. Unfortunately, this never happened.

If you are looking for something dishy and trashy and gossipy, this is not the non-fiction book for you. If you are looking for something well-written and smart, you won’t be disappointed. The one thing that still bothers me about the one star reviews I read is that this book, even if you don’t like it, deserves nothing less than two stars just for the quality of the writing alone. I’m giving it five.