From what I gather, there’s a sex club in New York’s financial district that isn’t gay this time. It’s being dubbed as a “swingers” club, where I’m assuming they party and swap and do all sorts of other things. But the neighbors aren’t too thrilled with them. Unfortunately, the neighbors hear all kinds of noises that drive them to virtual distraction. So far, the police haven’t been able to nail them on much because the swingers all hopping, swapping, and singing for free.

Here are some of the more entertaining comments from the article.

“This is an office building. We saw them move eight mattresses up there! That was horrendous.”

“If they can go that long, God bless them, but we shouldn’t have to hear it,” one tenant complained.

This one I didn’t even know existed…sexy karaoke.

“They often will do sexy karaoke, so you can hear that quite clearly through the wall.”

You can read more here. There’s a photo of the building and if you’re even remotely familiar with Manhattan real estate you can see these are not poor swingers.

I just thought I’d post and sensationalize about straight people having hot, dirty, sleazy erroneous sex for a change.

In the past I’ve posted about racism, gay hate, homophobia, and even gay baiting on Big Brother. Now Dick Donato, a former houseguest on Big Brother, Season 8, recently disclosed that he was asked to leave the Big Brother house during season 13 early because he’s HIV positive.

I remember season 13 on Big Brother very well. Yes, I watch each year. I’ll admit that. Dick, better known as “Evel Dick,” won the half million dollar grand prize during season 8, and he was asked back to the game during season 13, with his daughter, to play again. During that season, I remember being stunned that he disappeared completely from the show. And as I recall the only mention was that something family related had happened and he had to leave for personal reasons. We all knew there was more to THAT story.

Here’s what Evel Dick has to say about it now in People Magazine:

Donato was competing on season 13 of Big Brother when producers called him into the house’s Diary Room. “They told me that something was wrong with my blood test,” he says. “They had done two HIV tests. One had come back positive and the other had come back negative.” The show’s doctor took more blood. Two hours later, Donato learned the life-changing news. “When they told me, I just went numb,” he says. With little explanation, Donato left the show.” They had a car take me from CBS to my mother’s house. She was the first person I told.”

Donato is now speaking up because he’s trying to help break the stigma associated with HIV.

You can read the rest here. I have so many mixed emotions on this topic I’d rather not even get into them because I don’t think we’re getting the full story here.

When I posted about The Normal Heart, I thought Mark Ruffalo took the film and ran with it. It’s not always the case when an actor owns his character the way Ruffalo did. And now he’s taking a public stand against Brazilian President, Marina Silva, because of her stand against gay marriage.

It all happened, once again, on Twitter. The interesting thing is the way Silva replied to him.

‘I cannot, in good conscience, support a candidate who takes a hard right approach to issues such as gay marriage and reproductive rights, even if that candidate is willing to do the right thing on environmental issues,’  he said.

‘I have fought for marriage equality in my country and see it as a reflection of the quality of a candidate.’

In response to Ruffalo, Silva posted on her Twitter account that she supports ‘gay civil marriage and expresses this in her government program.’

You can read the rest here. It’s unclear to me what “civil marriage” is considered in Brazil. It is more like domestic partnership? I have a feeling from the comment thread it’s more like civil unions. Not good. It’s also pointed out in the comments that some people are not fond of the term “gay marriage.” I only use it because people recognize that, and so do search engines. Search engines are important to anyone blogging these days. I prefer marriage equality.

This is one of those articles that make bloggers blink when they first see them. A guy named Michael Hoffman claims he’s humiliated. Why you ask? Because a few gay jack off videos of him recently surfaced and he’s not sure he wanted that to happen.

‘Hi guys, it’s Michael Hoffman,’ he says. ‘Most of you know me by now. I just want to say I know there are videos going around of me. I wanted to say a few things. I’m not gay. Those videos I can understand making me look that way – and I respect gay people completely – but I’m not gay, I’m straight.’

Hoffman explained why he made the videos: ‘I need the money, plain and simple. I made over $10,000 selling those videos.’

There’s more here, and it only devolves from where I left off. Why you ask again? Because he’s not only humiliated for doing jack off videos, he also humiliated and very defensive about being thought of as gay. (It’s okay that you’re gay, but make it clear that I’m not.) And that’s the real insult to all gay people everywhere. The shame he feels is the same shame they’ve made us live with all our lives.

I wish these straight guys would just get a clue for once. He could have handled this so differently and no one would have cared. What he should really be humiliated about is coming off so homophobic.

If you don’t really get that, try thinking about it this way. A gay guy has photos of himself published and makes long, detailed explanations that he’s NOT straight. In fact, I don’t think I’ve ever heard a gay person do that. …”Yeah, those nude photos are me, but I’m not straight. Get that. Don’t give me weird looks. There’s nothing wrong with straight people. But I’m not one of them.”

I hope you get the point, because, you know, I’m not straight either. There’s nothing wrong with those straights. But I’m not one of them.

Glendora Hill: Too Hard to Handle
by Ryan Field
﻿
Publisher Purchase Link $4.99 (always cheaper at the publisher)Purchase Link to Allromanceebooks.com ﻿ 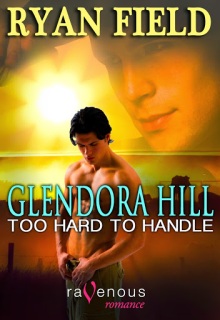