And because of search engines, the book was still banned. I have posted about this numerous times, and I’ve stated that I never have, and never will write a book or story with an underage character.

I assure you, there are no underage characters in this short book. I don’t judge those authors who decide to do things like this, but I’ve never done it and never will do it. In fact, the main character, Jared, the guy referred to as a the Skater Boy, is only a quasi skater boy. He’s in his twenties and is clearly a consenting adult.
But I am curious about something, and I’m hoping someone can offer an opinion. It’s not something I’m writing, but a friend asked me this question and I’m not sure how to answer. I hate censorship, but my gut instinct is to play it safe at all times with things like this. You can e-mail me in private at rfieldj@aol.com or leave a comment here or on social media.

Any thoughts or e-mails will be appreciated. 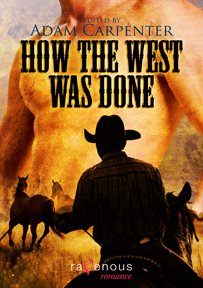 HOW THE WEST WAS DONE was released today by ravenous. It’s edited by Adam Carpenter, and a short story of mine, RUDY’S NEW KAZOO, was included in the book.
I haven’t read the entire book yet, but my story revolves around a young college graduate who decides he’d rather work on the family ranch instead of teaching school. When his father hears this, he decides to send him to the most dangerous, isolated part of the ranch to herd sheep. It’s actually such a bad job, no one has ever been tough enough to remain there very long. But Rudy is determined to succeed, and with the help of a very sexy ranch manager he learns more about being a cowboy than he ever expected.
This story, for me, is a classic example of how I prefer to write erotic fiction. It’s very sexy, but it you took the sex away there would still be a strong story. Below is an excerpt from the first few paragraphs of RUDY’S NEW KAZOO.
Rudy’s New Kazoo

Originally, the plan had been for Rudy to start teaching high school after graduation. He was only a few years older than most high school students, after all…almost twenty-one, of legal drinking age come August. He’d majored in science and could have taken a job in almost any high school in Montana, where science teachers were scarce. Not to mention that he’d graduated top of his class, with honors. But no, the day after graduation he announced that he wanted to work on the family ranch and learn to become a cowboy instead. And since his father thought he was just going through a passing phase…he’d done that a few times before…it was decided that he would spend one year working as a ranch hand on the north mountain and learn the necessary skills from the ground up. His job would begin with fence repair and general clean up, which when translated into an actual job description meant he’d be hammering bent, rusty nails and cleaning debris under the supervision of Cody Bloodworth, the manager.
In l968, the north mountain was an isolated part of the ranch, where sheep were herded and life was primitive. You couldn’t even get there by truck; you had to ride up on horseback, which took half a day. It wasn’t Rudy’s ultimate dream to be sent there; he would have preferred working with the other cowboys on the main cattle ranch. But he knew he had to prove a few things to everyone if he was going to be taken seriously as a cowboy, so he accepted the job with a smile on his face. One of the things he had to prove was that he was physically strong enough to endure the challenges of working on the ranch. He only stood five feet five inches tall, his body was slim and wiry and his features were delicate and chiseled. His hair was long and wavy and blond; the only body hair he had was a small patch of dark blond above his penis. Though he wasn’t effeminate in any way, there had been many times when people had mistaken for a young woman.