One of the posts I wrote while writing about a story set in the Edwardian Era, Unmentionable: The Men Who Loved On The Titanic, has to do with how difficult it was to find any recorded information at all about anything male/male related during that time. And this article about Langston Hughes, African American Writer, is a perfect example of the information I found lacking in all my research. And this total blank continued from Hughes’s birth date in 1902 right up until the 1960’s.

For most of his 65 years, Hughes championed his fellow black people, their beauty, and their shared culture. Through his poems, novels, plays and critical commentary, Hughes became the de facto leader of the Harlem Renaissance, a literary superman of sorts. He was possibly the most famous young black man of the 1920s, and he used his fame not only to celebrate his race, but also laborers, the colonized and other oppressed people. For example, he opposed Franco in the Spanish Civil War, which he covered for The Baltimore Afro-American. For all his liberal activism, though, Hughes couldn’t fight for the gays. Not openly, at least.

You can read more here. It gives examples and shows how often Hughes made reference to gay culture…even though it was not called gay back then.

I’ve read a good deal of his work and he’s one of my favorite authors.

No Gays In Boston Parade

In South Boston, a gay group called MassEquality was not allowed to fill out an application to participate in a St. Patrick’s Day parade  because the organizers of the parade believe they would be sending wrong messages. I’m not joking.

MassEquality was notified their application had been rejected via an after-hours voicemail left by the parade organizers who cited the 1995 US Supreme Court decision in Hurley v. Irish-American Gay, Lesbian and Bisexual Group of Boston, as the reason they are legally able to legally able to exclude LGBT groups from participating. In that ruling, the Supreme Court granted John J. Hurley – the previous organizer of the parade – the right to deny any group from participating if it presented a message that was contrary to the one the private organization wished to express.

What I don’t get is that anyone would turn anyone away from being part of a parade at this point in time. Parades in general are becoming as relevant as drinking water directly from the faucet. Who does that anymore?

But, aside from how dumb I think all parades are, the point here is more about gay-hate, being anti-gay in South Boston, and not allowing a group of people to share the same equal rights as everyone else.

And laws designed by judges with an agenda with the specific interest to target inequality. 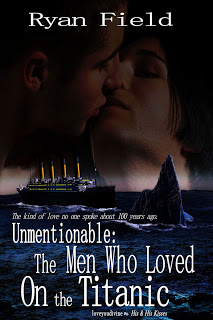 Although the Titanic actually went down on April 15, 1912, it hit the iceberg on April 14, 1912 and I’ve always considered that the exact date that led to its ultimate demise. And since tomorrow is April 14th, and it’s a Sunday, I figured I would post something now in case I can’t tomorrow. It’s not going to be too long because there’s not much to add about the sinking of the Titanic we don’t already know, and there’s also not much info out there about being gay at the end of the Edwardian Era because no one with any amount of sense would have admitted to it.

And that’s because homosexuality wasn’t discussed openly, it was considered illegal in most places, and those who “practiced” homosexuality lived in fear they would be discovered. I wrote about this in a story I released last year with Loveyoudivine.com titled, “Unmentionable: The Men Who Loved on the Titanic.” I’ll repost the plot description below, but I wanted to add that I took my story to an exaggerated extent where one of the main characters actually dressed up as a woman in order to board the Titanic with his lover and not be questioned about it. The reasons why they did this had a lot to do with the emotional attachment they felt toward each other. Mainly that they wanted to just once see how it would feel to be together like straight people in public, which is something they never really had a chance to do.

I really wanted to focus on that aspect, the part about how difficult it was to be in love with someone and never, NEVER, be able to show it in public…or even take the chance of being seen in public. And unless you know how this feels on a personal level, and have experienced this on a personal level, you are not going to ever understand the full impact of how it defines you. Unfortunately, there are still gay men and women all over the world, including the US, where they can’t take the chance of being seen with the people they love. I’ve even experienced it myself.

Of course what I wrote in “Unmentionable” is pure fiction. But could it have happened? Why not? In those days men who fell in love with other men would have been desperate to spend time together. And being denied the ability to spend time with the person you love in public had to be absolute hell, so my characters devised a plan to find out what it was like to actually travel together openly. And even in this case they weren’t traveling as lovers in public.

As I said above, there isn’t much written about being “gay” in the Edwardian Era anywhere because the information isn’t out there. But just because the information isn’t there doesn’t mean there were no men who loved men in those days. And  you can be certain of this, make no mistake, there were, indeed, men who loved other men on the Titanic and no one ever knew about it.

One reviewer on Amazon said this about “Unmentionable”

I love this story because it’s really interesting, and sweet, but also because, I’ve always said that Jack and Rose from Titanic, should either both die, or both live, not what actually happened. 🙂

No spoilers from me on this one. But that review pretty much sums up what I wanted people to get from the story.

One hundred years ago on April 14, 1912, the RMS Titanic hit an iceberg on its way to New York. Though it had been considered unsinkable by all standards, it went down in the cold waters of the Atlantic, taking with it stories of love and romance that weren’t discussed openly in those days. This was especially true with stories of love between two men. One of those hidden stories of the Titanic dealt with the unyielding love and strong romance between a young man named Liam and his older lover, Oliver. Because Oliver was a wealthy business man in America with a great deal of notoriety, the only safe way to bring Liam aboard the Titanic was to dress him in fine women’s clothing and claim he was Oliver’s shy, distant cousin returning to America for the first time in many years. They finally begin to relax when they realize that everyone on the ship believes Liam is a woman, until that fateful night on April 14th when destiny intervened and changed their lives forever.

Here’s link to The New York Times where you can read more about the Titanic. 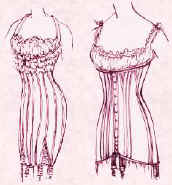 Here’s another reason why I both love and hate writing historicals: corsets.

I don’t actually need to know a thing about corsets. But I’m writing this new historical set during the Edwardian era and I have to give a fairly accurate description about the kinds of corsets that were worn back then…specifically around the year 1912.

This longer, streamlined corset was designed to enhance the figure of a woman and to compliment the fashions of this time period. And it didn’t last long. From what I gather, the corset started going out of style around World War I and dropped out almost completely in the l920’s when the girdle took its place.

But the research had to be done, even though it wasn’t a large part of the story I’m working on right now. I could have lived a long full life without this information, but once I started reading about it I have to admit that I did find it interesting from a trending pov. Evidently fashion has always been trending, and it always will trend. And corsets played a huge part in the history of women’s fashion, which couldn’t be overlooked in the story I’m working on right now.

I’m also sure a lot of women today are thrilled they don’t have to wear the corsets of 1912.