This one is pretty self-explanatory, no matter how shocking it sounds.

And it’s not just for cosmetic purposes. Doctors in S. Africa performed a penis transplant on a 21 year old who lost his penis to a bad circumcision. Another reason I’m not fond of the entire concept of circumcision, at least not without giving the man a choice. Most of us don’t get that choice.

“We’ve proved that it can be done — we can give someone an organ that is just as good as the one that he had,” Frank Graewe, head of the Division of Plastic Reconstructive Surgery at Stellenbosch University, said in a statement. “It was a privilege to be part of this first successful penis transplant in the world.”

They don’t say where they got the organ, but I’m assuming it’s like any other organ donor program.

You can read the rest here. I think it’s wonderful for people who need it. My one question is would they be able to use an artificial penis? And next, what are the odds of the body rejecting it?

I remember my first gay bar experience very well. It was absolutely wonderful. I was still in college and I drove all the way from Madison, NJ to New Hope, PA where there were three gay bars at the time. It was the first time in my life I felt as if I could be comfortable, and I’m not exaggerating this. I knew I’d found a home, so to speak. It wasn’t about sex, alcohol, or even dancing. It was the absolute comfort of being with my own kind. I didn’t have any expectations that night; that came later.

In any event, here’s an article that talks about first gay bar experiences. As you can see, they are varied, which is understandable because so much has changed in the past twenty years. I also think they’re from very young gay men who don’t know a world of complete homophobia…like it was in the 1990’s.

“Yesterday I went to my first gay bar for the first time and I felt like a total different person.”

You can read the rest here. I think it’s interesting how some of them reacted.  I’d like to see the question presented to gay men who went to their first gay bar prior to 2000.

Five Things About Your Ass

This is one of the most obtuse articles I’ve read in a while, but it’s not completely without merit. For one thing it’s great clickbait, and for another the ass is important to gay men. Yes, that ass.

You can read the rest here. I didn’t know a few. In fact, I never knew that in some cases some men will never physically be able to bottom. And I never knew gay men were supposed to get pap smears. I’m still on the fence about all of it, though. Do I need to be told to eat fiber?

The Way We ALMOST Were
A Gay Parody
Amazon 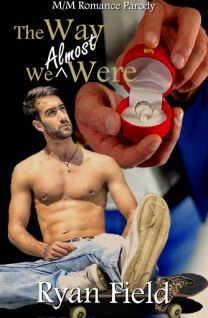