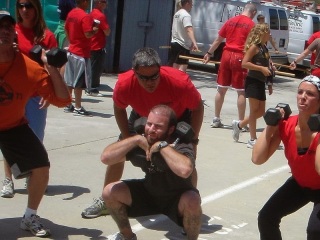 In case you haven’t heard, there’s a new fitness craze sweeping pop culture called CrossFit training. I know a few people who do it, I’ve looked into it personally, and there’s a long, interesting piece about it in Time Magazine this week. I can’t link to Time because they have paid content and I know a lot don’t have subscriptions. But here are a few interesting things about CrossFit I thought were worth mentioning.

2:57 Colin Clark’s Iron Oak CrossFit started when he and a few friends started working out together in his garage. As the results came, the word spread, and soon he had to affiliate and move into a larger facility. Clark described the systems he put in place as he went from a garage training group to a business, and he detailed how he helps individuals accomplish their personal goals in a group setting. He talked about how he approaches nutrition with members and explained how that approach has changed over the years. Clark also described his on-ramp program and explained why classes at his affiliate are 75 minutes rather than the traditional 60.

You can read more here and check out the entire web site. In this particular piece there’s a very cute guy, which seems to be something that follows everything CrossFit related. The men are gorgeous and I’m not posting about this by accident. I’ll be adding a main character to a book who is a CrossFit trainer in the next installment of the Glendora Hill series.

And if you just do a simple search you’ll find all the info you need. From what I’ve learned so far, the basic concept behind CrossFit training is pushing your body, with repetitions, to lengths you wouldn’t normally do with cardio or weight training. Don’t quote me on that, though. Here’s a better definition.

CrossFit, a trademark of CrossFit Inc., is a strength and conditioning program with the aim of improving, among other things, muscular strength, cardio-respiratory endurance, and flexibility. It advocates a perpetually changing mix of aerobic exercise, gymnastics (body weight exercises), and Olympic weight lifting. CrossFit Inc. describes its strength and conditioning program as “constantly varied functional movements executed at high intensity across broad modal and time domains,” with the stated goal of improving fitness, which it defines as “work capacity across broad time and modal domains.”

There an informative piece at Huff Po where someone talks about experiences with small brick and mortar bookshops vs. Amazon. It’s commentary that comes from personal experience and I can back up almost everything written there.

And that’s OK, I can rise to a challenge, make it work — except for one thing: book snobbery. The kind of snobbery that prompted a local bookseller to require a $100 fee for shelf space to carry five of my books. He had never read my book or even looked at it; he was merely responding to the fact that it was published by a small press and wouldn’t be arriving through the traditional distribution method. I declined his offer.

Aside from the fact that I believe all people will be reading digital books eventually, I can support this comment through my own personal experience with a bookshop I once contacted about carrying print versions of a few of my books. Some don’t even want to work with smaller genre authors, which is a shame, most of all, to readers who aren’t yet familiar with digital books. They are missing out on so much and they don’t even know it.

The author of the piece even discloses she’s not a romance fan, but also knows and understands there is a market for it.

This one bothers me a little because it’s a look at twin boys, and one is “all boy” and the other has “highly feminine” traits. It doesn’t bother me in a literal sense. The highly feminine boy could be transgender, or he just identifies with women. No problem there. I just get confused when they tend to link gay with feminine traits. But I’ll explain more about that below.

As identical twins, Patrick and Thomas began as genetic clones. From the moment they came out of their mother’s womb, their environment was about as close to identical as possible – being fed, changed, and plopped into their car seats the same way, having similar relationships with the same nurturing father and mother. Yet before either boy could talk, one showed highly feminine traits while the other appeared to be “all boy,” as the moms at the playgrounds say with apologetic shrugs.

The piece discusses a few more complicated reasons for what makes people gay. It’s very long, so be prepared. We all should know by now that having feminine traits doesn’t necessarily make someone gay, nor does the lack of feminine traits mean someone isn’t gay. But, in all fairness, it’s really the title of the article that’s more misleading than anything. They do get into gender nonconformity, too. So a better title would have been what makes people LGBTI, which would cover more ground and tone down the stereotypes that often mislead people who don’t know much about the LGBTI community.

You can read it in full here.