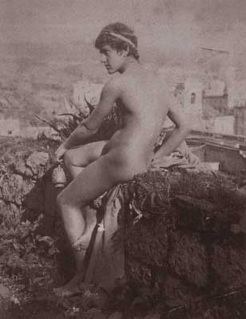 I was searching around at Deviantart for free to use photos and got a little sidetracked. But it was worth it, because I wouldn’t have found out about this had I been doing something else.

Vincenzo Galdi portrayed by Wilhelm von Plüschow in Posillipo, around 1890.

Vincenzo Galdi was an Italian model and photographer. He was born in Naples in 1871. He started as a model and pupil of photographer Wilhelm von Plüschow while he worked in Naples, then he moved to Rome with him, and eventually he ran a studio of his own in Roma between 1900 circa and 1907, taking photos of naked people (especially women). He was probably one of Plüschow’s lovers. After the 1907 scandal and trial that put an end to Plüschow’s career, which involved Galdi as well, he abandoned photography. He inaugurated an art gallery in Rome, in Via del Babuino, the “Galleria Galdi”, still operating in the 1950s. Rumors about Galdi’s death during WW2, circulating in the past, are therefore groundless.

The Sicilian Vincenzo Galdi was working in imitation of von Glœden but revealed a strong tendency to nearly pornographic images. Although a photographer of genuine accomplishment, he was so preoccupied with the size of the male member that the classical setting and pose often became a mere backdrop for the exposition of the model’s penis.

Selling photographs to a “men’s only” market and to the kind of men who preferred other men, in 1907, landed Galdi arrested for “insult to the public moral” and “selling excessive audacious photographic studies”. He spent time in prison and paid a heavy fine.

You can read the rest here, and the copyright to this photo has expired and it is in the public domain.