I think most people can relate to articles like this one. It’s about how Chris Pratt transformed his body in such a dramatic way…and in more than one way over the course of time. I think it’s interesting to watch how actors do this.

“I said to the creators that I wanted to get fatter for the role. They loved it. I announced it to the whole cast, and then it became a bit of a game: how fat can I get and how fast can I get that fat. I thought, ‘Oh my God, I’m getting fat.’ And then almost immediately I did something else and I thought, ‘Holy crap, I’ve never seen myself funnier.’ And I put the two together.

However, this is what happened:

I was impotent, fatigued, emotionally depressed. I had real health issues that were affecting me in a major way. It’s bad for your heart, your skin, your system, your spirit.

As a result, Pratt lost the weight and regained his body. He’s looking better than ever. You can check that out here.

I know we’re always complaining about body image and the unrealistic way it’s portrayed in the media, but I think the weight issue in the US is out of control just for health reasons alone. Sorry if you don’t agree with me, but this is coming from someone who gets up extra early every single morning to jog 45 minutes, in all kinds of weather, all year long. And if I don’t go out I use a treadmill at home. It’s habit now.

Here’s a link to a video that was put together with Andrew Christian underwear models that talks about how they were bullied and treated poorly for their sexual orientation.

We decided to share our own stories of how we came to have so much Pride. The road may not always be easy but it is always worth while to come out, be free, and find the love in the world. Hopefully by sharing our stories we are able to further inspire others and continue to help, as the song says, change the world.

All About Yves by Ryan Field

I’ve been re-releasing a few backlist titles with Ryan Field Press as indie e-books and I’ve been taking my sweet old time doing it. All About Yves is one of them. This particular book is also a gay parody on the classic old film All About Eve. It’s not fanfic. I don’t do fanfic. But I always disclose that when I post about it. Of course there are those who don’t get parody, or gay humor and gay culture. There’s not much I can do about that. I’ve had a lot of positive feedback from this book, from gay men.

In any event, here’s a link to Allromanceebooks.com.

And here’s one for Smashwords.

It will also be on iTunes and other places where e-books are sold. The cover is brand new but the content is the same. 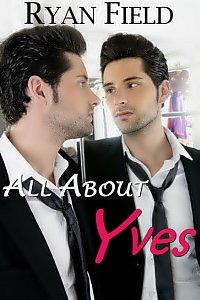 Marco Denny has international fame as a male model, good friends, more money than he’ll ever be able to spend, and a loving fifteen year relationship with the man of his dreams. The only problem is time. Though thirty-five year old Marco is still at the top of his game, he’s crossing into middle age and he’s not sure how to handle growing older in a youth oriented industry. When twenty year old Yves Marisano shows up outside his dressing room one night, Marco has no idea that all of his fears about aging are about to come true.

Handsome young Yves is shy, polite, and humble. Marco Denny is his idol and there’s nothing he won’t do to please him. When Yves tells Marco a sob story about his difficult past and how his family forced him to go to one of those camps where they try to turn gay men into straight men, Marco feels sorry for him and gives him a job as his personal assistant.

Marco has no idea obsessive Yves is not only smarter than he looks, but also more ambitious than he’s willing to admit. While Marco is busy with his career and his life, Yves is watching Marco’s every move. Yves studies him closely, from the way he walks to the way he eats his food. He mimics the way Marco does his hair, dresses, and talks.

At first Marco is flattered. But after a few unusual events he starts to question Yves’ motives. And when Marco’s good friends and his life partner don’t believe there’s anything wrong with Yves, Marco’s entire world turns upside down. He’s forced to face his present and his future, his wonderful fifteen year relationship with the only man he’s ever loved is tested to the limit, and for the first time in his life Marco is humiliated in public.