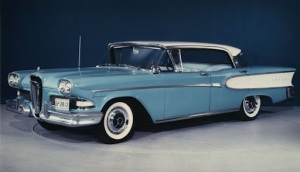 Just like the fabled Edsel, some great books are destined to fail. Sometimes it’s because the cover is wrong. It could be because the title is wrong. Other times the cover copy is off and doesn’t describe the book well. And sometimes the reason is a little more complicated and the author has no control.

In November 1956, Ford settled on a name for its new line of mid-priced automobiles: It would be called the Edsel, after the son of the firm’s founder. Launched the following September, the Edsel was an utter flop, and has since become an exemplar of a product gone wrong, of how seemingly omnipotent firms and advertisers can be laid low by grass-roots consumer antipathy.

An author friend contacted me about a year ago about something he was going through. Here’s the abbreviated version below. No names, but I do have his permission to write about it now.

Author friend: My publisher wants me to use a pen name for my next book.

Me: Okay. Are you switching genres? That makes sense.

Author friend: No. The book is in the same genre.

Me: But you already have a few books out in this genre and readers know you. Why would the publisher want you to use a pen name?

Author friend: They think I have too much exposure.

Me: Seriously? No offense, but you’re not exactly Ryan Seacrest. You’re writing in a sub-genre, m/m romance, that’s on the fringes of publishing. How could you possibly ever get too much exposure?

Author friend: I don’t know. That’s what they said. They brainstormed about it and decided I should use a pen name.

Me: You don’t sound too happy about it.

Author friend: I don’t totally get it. And I can tell you right now there’s no way I’m going to be able to promote this book the way it should be promoted. I feel creepy about using a pen name in my own genre. It’s uncomfortable and I’ll probably wind up not doing a thing to promote the book.

Me: That’s a shame. Can’t you talk to your publisher and reason. You know your readers better than they do. Maybe they’ll listen.

Author friend: They won’t. I love them and don’t want to hurt their feelings. When it comes to these things they always believe they are right. They have PR people giving them advice. They have a lot of experience.

Me: Well, maybe they are right. You never know.

Author friend: That’s what I’ve been telling myself. But deep down, I don’t have a good feeling.

Me: Let me know how things work out. It’s not the worst thing in the world.

Author friend: Okay. Thanks for listening.

Six months later I spoke with my friend again and he told me the book did, indeed, tank. He said he started a blog and tried to do as much basic promotion as he could. But in the end, he was a brand new author with a handicap. He didn’t feel comfortable promoting a book in a genre with a pen name where he was already established with his own name.

And this is how some books fail. If anyone has ever experienced anything like this, feel free to comment anonymously.