This is one of those posts I do every now and then when I’m getting ready to submit a book to the publisher. It helps me see what the book description looks like in print, it helps me check out the first few pages, and readers tell me they like reading these things.

This particular book is the final novel in the eight book series I’ve been working on for the last year for Ravenous Romance. And this time, with this final book, for some reason I ran way over the contracted word count and it wound up being 113,000 words. Before I started editing it, it was almost 150,000 words. It could have stood alone at 150,000 words, but I think it works better when it’s a little tighter. I think part of the reason the book ran this long is because it covers a time period of over twenty years, from l990 – 2012. I don’t usually do that, because I prefer to cover shorter time periods. However, this time the story seemed to take over and I didn’t have much of a choice.

Here’s the book description, in raw form. Below that is an excerpt from a part of the book where Ethan wants Travis to read his new novel…also unedited, in raw form, and set in the year 2000.

The following tech issue that recently happened to me might not apply to new authors who are self-publishing, however, I think it’s important to mention for published authors who might be self-publishing back listed books. And, for those self-publishing more than one book at a time. There are some things you just can’t portend no matter how hard you try. And what happened to me late last night with Something for St. Jude is a good example of this. You may have heard me screaming at Amazon.

I’ve posted about how we’ve been re-releasing all my back listed stories and books from now defunct small e-press, Loveyoudivine.com. So it’s not really self-publishing in the sense that these books have already been through the publishing process from developmental editing, to covers, to copy editing. And in most cases, these stories have even been through more than that because many were trad published in anthologies that were released years ago by respected LGBT publishers like Cleis Press. They’ve gone through more than a few edits by excellent professional editors. I even left the original book covers, which I wanted to change, so readers would not get confused. So I thought I had nothing about which to worry.

Think again. Even though I’ve always been completely open and honest about all my product information…to the point of being a pain in the ass with blog posts like this, late last night I went to Amazon to check out Something for St. Jude and I noticed a review (a good review) that read, “False Advertising.” And since I don’t even advertise my books anywhere…or much of anything I write…I read the review a few times, bought the book myself, and figured out the issue.

Evidently, there was a tech issue during the upload where several short stories were added to the short e-book, Something for St. Jude. In other words, instead of getting the one short story for .99 as it had been described in the book blurb, the reader wound up getting Something for St. Jude, plus a few additional short stories for free. Of course when I get something for free by mistake, I say thank you and smile. But two readers were so upset they’d received all these short stories for free when they purchased the .99 e-book they left reviews about it. And I can’t thank them enough for leaving these reviews. This is truly the kind of feedback the world needs to see. If it hadn’t been for these reviewers mentioning this tech issue, I would never have known all these short e-books were being given away for free with a .99 short story.

Don’t get me wrong. I honestly don’t mind that people read the extra books for free and I hope that a few people enjoyed them. I’ve never been one to complain about these things, and my publishers often get frustrated with me because of this. But that’s because I do believe that when issues like this happen and someone benefits from it, good for them. To me it’s like going into the store, finding a mismarked item, and making the store honor the mistake. In fact, with all the e-book pirates out there pilfering my books, I’m kind of glad this mistake happened so readers who do pay and do things the honest way got a little surprise when they purchased SfSJ for .99 and found more than they’d expected. Good for them!

But, in the same respect, I felt awful about those poor readers who had received free e-books and didn’t want them. You can read the reviews here. I’ve left comments apologizing and thanking them for pointing this problem out to me. I still can’t thank them enough. And the problem has been fixed now, thanks to these dedicated Amazon reviewers, and Something for St. Jude is now one short story instead of five short stories for .99. As I said, had it not been for them I never would have known. And shame on me for not triple checking that. But as I said, there are some things you can’t predict no matter how hard you try. And when it comes to re-releasing back listed book issues, this might be one of them other authors should pay attention to. I’m still not completely certain how this happened. I checked all of the other books that were released around the same time and they seem to be fine.

I’d also like to add that if things like this ever come up and you need to contact me, my e-mail is public and I welcome all comments in private. I will respect your privacy and discretion is extremely important to me. rfieldj@aol.com

And now it seems Weiner’s communications directer went batshit crazy about an article in NY Daily News where one of Weiner’s nasty little interns allegedly wrote a tell-all. According to this article, the intern claims Weiner had problems getting people to work on his staff. The only reason people were on Weiner’s staff were there to get closer to his wife and Hillary Clinton (Weiner’s wife works for Hillary). Basically, it sounds like the intern bashed all of them in a breach of confidence, including the communications director. And the communications directer, Barbara Morgan, went after the mouthy little intern without holding anything back. And it was very entertaining.

In a statement this morning that was sent to reporters and available on The Washington Post, Morgan says, “In a moment of frustration, I used inappropriate language in what I thought was an off-the-record conversation. It was wrong and I am very sorry, which is what I said tonight when I called and emailed Olivia to apologize.”

My fifty cents: Sometimes you just have to get it all off your chest and let them have it.

I just finished the book description for the new civil war romance, A YOUNG WIDOW’S PROMISE.

This is raw; the unedited version. But I wanted to see how it looked in print before we made any changes.

Felecia Roundtree is thirty-seven years old, she’s already lost her husband in battle, and prays each morning her two young sons live to see another day. With her own two hands, she’s turned the front of her property at remote Locust Point, NJ, into a burial ground for unknown Confederate prisoners of war, hoping someone will return a kind gesture to her own loved ones. Then one morning in August, just after she has a vision of her dead husband, three Confederate prisoners of war turn up at her doorstep begging for mercy. One is near death; the other two aren’t much better. Though she’s reluctant at first to help the enemy, she offers them food and shelter, and then eventually begins the romance of her lifetime with a young Confederate named Calvin. When she learns a deep dark secret about the other two Confederates, she’s not sure what to think. Felecia has no idea she’s even falling in love. Nor does she realize she’s preserving an important part of American History. But she’s true to her promise every step of the way. 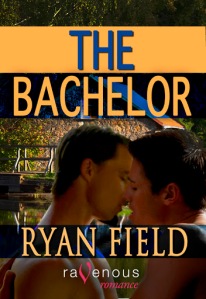 Here’s a quick book description of The Bachelor, which was recently released.

I’ll post an unpublished excerpt later this week. And if anyone wants to read a published excerpt check out this link. (I’m a big fan of the way ARe does product details.) It’s all right here. Or, the publisher’s link, here.

Jim Johnston has been trying to break into show business for seven years, and now he has a chance to audition for a new reality show called The Gay Bachelor. But he missed the Hollywood auditions, so he has to travel back home to the deep rural country of Southern New Jersey and audition in Philadelphia.

Jim arrives at his parents’ old brick plantation style house for the first time since he graduated high school. When he sees how much they’ve aged since he’s been gone, it tugs at his heart and he is determined to make things right again so it doesn’t take another seven years for him to return.

But this doesn’t stop Jim from having a quick affair with his mother’s maid’s strapping nephew while his mother and father are at church. And it doesn’t stop him from falling hopelessly in love with one of the producers of the new reality show, The Gay Bachelor, when he auditions in Philadelphia.

With all the obstacles Jim faces before the audition, he discovers a few things about himself he didn’t know. In spite of the disappointments…and a few awkward moments with a chocolate cupcake…he’s determined to concentrate more on love than on casual sex. Even though he’s not sure how it’s all going to work out in the end, he’s ready to take his chances for the sake of love.

One of the things I personally hate most about searching through an author’s web site or blog is feeling as if I’m being duped. Like when an author mentions that he or she has thousands of publishing credits without listing them clearly, or when I get ambiguous book descriptions that contain nothing more than wordy blurbs that tell me the book is “fascinating,” “intriguing,” and “heart wrenching.” This sort of thing might have worked in the past for authors, because there was no way to communicate with them and we were forced to take chances on buying their books. But things have changed and I think authors should be available to answer questions about their books.

After a reader contacted me recently about one of my books, I thought I’d post something to let readers know that if they don’t feel they are getting good descriptions of my books, please e-mail me and I’ll give you more info about the book. One reader, “Elaine,” wanted to know how one book ended. She had very specific reasons for this, and I was only too happy to oblige. This way she didn’t have to buy a book that would disappoint her, and I didn’t have to feel guilty about someone purchasing a book and being disappointed with the ending.

And if nothing else, whether you like my books or you don’t, I work hard with my editors and publishers to make sure each book is described well and that people know what they are buying. And to take it one step further, please feel free to contact me if you have any additional questions.