Here’s another batch of e-books that just went up on Allromanceebooks.com. I decided to release them slower on ARe because when you release back listed books…even if they are .99 e-books…you wind up taking over the entire new release page at one time and I don’t want to step on anyone’s toes so to speak. So for now, this is the next small batch of five. And, for the record, none of these e-books contain any of the following elements.

Anything with pedophilia, which involves sexual situations between adults and children. We are not interested in “barely legal” situations, either.

Anything with necrophilia, which is sex with a truly dead body. If your vampires and zombies are having sex (with the living or each other), it better be lively.

Anything with bestiality, which is sex with animals. Sentient beings, including shapeshifters, centaurs, and the like must be adequately anthropomorphized.

Rape or incest. If it’s a necessary part of a story, its purpose should not be to arouse.

As the title suggests, this short story stand alone (stand alone means it’s not a full length novel for those who might be wondering…and it’s not priced like a full length novel either) revolves around surfing in Carmel-by-the-Sea, California. It’s only a small part of one young man’s journey, but it’s a part of his life that may or may not have a great deal of impact on him in the future.
Description
When young Stedman graduates from college, he decides to spend the summer in Carmel-by-the-Sea, California. He wants to take a well-deserved break from studying, he needs to face his dreaded fear of water, and he’s desperate to work on overcoming a sexual phobia he can’t explain to anyone. It’s such a ridiculous phobia he can’t stop thinking about it. In spite of many protests from his successful Afro-American father and his gorgeous Caucasian mother, he takes the cross country road trip to Carmel-by-the-Sea anyway. The first thing he does when he gets there is sign up for surfing lessons so he can work on his fear of water. And before he even knows what’s about to happen, thanks to the experienced hands of his big strong surfing instructor, he soon finds himself in the perfect situation to work on his sexual phobia as all.

This short story stand alone e-book, Billabong Bang, started the publication process way back in August when the sun was shining and we were in the middle of a heatwave. And for reasons that just kept popping up, the release date kept being delayed time and again. It was partly my fault, because on the last round of edits I decided to cut the entire first third of the story and rewrite it. But I’m glad it took that long, and I think the characters benefited from it. It’s multi-cultural m/m erotic romance, with a main character who is of African descent.

Another great cover by Dawne Dominique.

I swear this all happened last night because the previous post I wrote discussed the relationship between editors and authors.

I’m talking about a new stand alone short story that’s coming out soon titled, BILLABONG BANG, with a Jan. 14 release date. It’s sort of a coming of age story and the character has two fears: one is sexual and the other is a phobia of water. But I also just had a short story released in a SEX AND TOYS anthology this week with ravenousromance.com (I usually post a cover photo, but this one, although I totally love it, might be too steamy for a pg rated blog), and that story also has a character who is dealing with a sexual phobia and a fear of heights. The differences are vast, especially when it comes to the sexual phobia’s themselves. But I didn’t want the new stand alone to even remotely resemble the short story in the anthology, so I’ve been going back and forth with my editor at Loveyoudivine.com all week making sure it doesn’t.

And last night she sent me a preliminary pdf file of the book and I almost said, “great, let’s go with this.” But I stopped and thought for a moment. There was still something bothering me about this book and I had to get it right. First, I thought there was too much back story in the beginning. Second, the main character is of African descent and I thought I’d gone into too much of a description about this. Personally, I believe the only way to get rid of racism altogether is to start thinking and seeing with colorblind eyes. And while it’s important to put something in that describes the character’s race sometimes, there’s no need to be too obvious about it. At least that’s how I view it. Someone else might disagree.

Ultimately, this fix was simple. I just cut the first 1,000 words from the story, made two line changes, and sent the revise back to my editor…with a few huge apologies, and many thanks. Could the story have gone to publication as it was? Certainly. But would the readers have been bored to death with the first few pages? Absolutely.

And my wonderful editor, Dalia, didn’t say a word. She made the changes, sent me the pdf early this morning, and it looks ready to move now. This, to me, is the perfect example of a positive working relationship between author and editor. It’s back and forth, give and take. And even though most books and stories don’t have as many complications as BILLABONG BANG did, it always nice to know that if there are they can be worked out well. 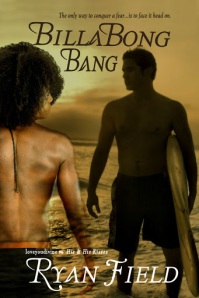 This short stand alone should be released about the first of the year. But here’s a sneak preview of the cover. I’m looking forward to it because it’s been in the making since last May. One of my editors went through a personal family crisis and we put this book aside for a while. I thought it was better to just set it aside and let her get to it when she was ready to work again. And I’m glad I did. It was worth the wait.
Good editors aren’t always easy to find, which is something I’ll post about very soon (smile). 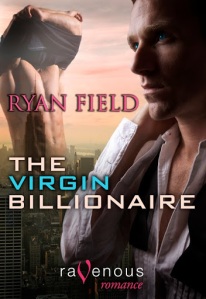 I remember when summer was the slow time in publishing. Editors, agents, and writers took it easy and recuperated. Well e-publishing has changed this for me and most of the other authors, editors, and even a few agents I know (I’ve seen a few new lit agents starting to take on authors who only work for e-publishers). This has been a busy month. In June, I finished two stand alone short stories for Loveyoudivine.com and a full length m/m romance novel for ravenousromance.com. And this past Friday I finished yet another new novel for ravenousromance.com that I’ll be submitting for edits by the end of next week.
The two stand alone stories are titled, IT’S NICE TO BE NAUGHTY and BILLABONG BANG. The romance novel is titled: THE VIRGIN BILLIONAIRE and I’ve posted a photo of the cover with this post. I haven’t seen the covers for the two stand alones yet, but as soon as I do I’ll post them as well.
Blurb: THE VIRGIN BILLIONAIRE
Luis Fortune spends his nights escorting affluent older gentleman to parties, nightclubs and restaurants. And though he’s not officially a rent boy because there’s never any physical contact, he is paid well. He charms them with his looks and his carefree attitude. He makes them smile by laughing at their jokes and listening to their dull stories. But Luis is only doing this temporarily, until the right older man asks him to settle down. He’s looking for something he can depend on, and until he finds it he won’t even give the stray dog that followed him home a name.

While Luis is searching for money and security, he takes comfort in reading a blog written by a woman in France he’s never met, Elena’s Romantic Treasures and Tidbits.. She adores gay men and romance, and she posts artistic photos, wonderful stories, and endearing posts about gay men that bring Luis a false sense of comfort and security on his darkest, scariest days.

Jase Nicholas is a forty year old high-profile billionaire who can pass for thirty. He’s spent the first half of his life running from the fact that he’s gay. And now he wants to find out what he’s been missing all those years. So he tells his family and friends he’s going on a pilgrimage for a couple of months, and then he drops out of sight so he can come to terms with his sexuality and finally lose his gay virginity. But instead of going on a pilgrimage, he rents a small apartment on Manhattan’s Upper West Side. He changes his appearance and plunges into a world of young gay men. And when one of the young men he meets is Luis Fortune, his life is never the same again.

At first, Luis and Jase become good friends. And though Luis tells Jase everything about his life, Jase keeps his true identity a secret from Luis. As far as Luis knows, Jase is a forty year old unsuccessful inventor who takes money from younger men. Luis has no idea he is really the wildly successful Jase Nicholas, The Virgin Billionaire.

Will Luis ever forgive Jase for keeping his true identity hidden?

And will Jase be able to give Luis the comfort and security he’s been searching for all his life?