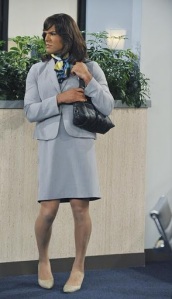 Once upon a time, a TV show that mocked transgendered people was pitched to high powered executives in Hollywood and they loved it. They loved it the same way people loved watching offensive racist “Mammy” characters in old 1940’s films like Gone with the Wind.

The TV show I’m talking about was called “Work It,” and it was about two straight men, living in Suburban, USA, who couldn’t get jobs because of a down economy. So what did these straight men do? It was classic. They put on lipstick, earrings, and high heels and went out to get jobs in full drag.

They not only got the jobs, they thrived in the jobs.

Oh, it was funny. It was lol, hahaha, and huzzah. The canned laughter could not be contained. And the more these two straight guys camped it up the more offensive it became. And it wasn’t just offensive to transgenders. They did a good job at offending women in the work force, too.

The amazing thing out of all of this is that the show actually got to the point where they gave it a time slot and let it air on TV. No one gave it a second thought. In Hollywood, where they are clearly not short of a gay population, I find this astounding at best and horrifying at the worst.

This is what finally happened:

The network said today that the sitcom about two men who dress as women to look for work is off the schedule after only two episodes aired. The Gay & Lesbian Alliance Against Defamation had protested the series, saying it mocked the transgender community.

The formal statement was poor ratings. But I can’t help wondering why it reached that point. And now I wonder what’s next and how much more defamation there is in store. It seems these days I’m offended as a gay man at least once or twice a day on social media by people who don’t even know they are doing it. I just received a private facebook message from a straight woman author and her husband, whom I assume is straight, who are producing and hawking a new film with gay content, about gay weddings. You can’t blame people for zooming in on a market they think is going to make them money. And you can’t blame them for working hard and taking advantage of a good thing while it lasts. But you can’t fault gay people for being offended when they don’t do it right.