There’s been a story floating around the interwebz about a guy who got stuck in a giant vagina sculpture in Germany and it took multiple teams of rescue workers to extract him from the big vagina. Evidently, it seems he went in feet first and wound up trapped. Why he wanted to enter the vagina hasn’t been disclosed. When openly gay journalist, Anderson Cooper, reported this story to his viewers he had a little trouble remaining as stoic as usual, to the point where he seemed to find it difficult to actually say vagina aloud.

“I am certainly no expert on the topic of…vaginas,” he finally said after a minor giggle fit.

“But I know enough to know that you’re not supposed to– really?” he said, pausing and laughing before omitting the word completely, “…to go in feet first.”

On the third try, however, Cooper was able to say the word without laughing or pausing.

Cooper also apologized early on, stating that he was not in anyway laughing at women or vagina so that those who don’t understand the relationship between gay men and the vagina didn’t go berserk on his Twitter feed.

You can read more here, and watch Cooper trying to get through this segment without falling off his chair. There’s also a photo of the man-eating vagina sculpture.

Of course those with a sense of humor will find this hysterical. Those without a sense of humor, will shudder and cross their legs. But it’s really all about the way the gay men naturally react to the question, “What do you think about vaginas?” that really makes this interesting.

The best way to describe their expressions is a cross between confusion and panic.

In a show of support to the LGBTI community, Starbucks raised the rainbow flag at corporate headquarters during Pride week in Seattle.

“We are thrilled that Starbucks is showing their support for the LGBT community in this very big, very public way,” Adam McRoberts, Communications Director for Seattle Pride, said in an email statement. “The flag flying over their headquarters will welcome thousands of visitors coming to Seattle to celebrate Pride this week and is a testament to the support Starbucks has shown the LGBT community over the years.”

I wonder what NOM thinks of this. Or Theresa Santai-Gaffney, the woman who went up against the Republican governor of Pennsylvania recently to appeal gay marriage after the governor decided NOT to file an appeal.

Update: I wanted to update this so no one gets the wrong idea. This is more about openly gay authors writing in other genres and the obstacles they face with agents and publishers. I have always believed that a writer should be able to write in any genre regardless of sex or sexual orientation. But when gay authors try to cross over into the straight markets they aren’t taken as seriously. And it’s not just in publishing. It’s in films, too. The same thing happens to women in certain genres that straight men dominate.

In 2009 I was asked to write a straight romance novel for an event on The Home Shopping Network called Escape to Romance. I had a rough deadline…a month…to write a 60,000 word hetero vampire romance, and I decided to use the pen name, Malia Sutton at the time. I don’t think I’ve posted about this book much anywhere. This pen name doesn’t even have an author page on Amazon because I never intended to do much else with it. I was paid a flat fee for this project and I felt awkward promoting this with a pen name. Plus, gay authors do not make the cross over into hetero romance easily. It’s interesting because straight women seem to have no problem writing gay romances or straight romances, but a gay man will crash and burn if he doesn’t use a pen name and a fake identity writing straight romance.

This has nothing to do with writing ability. I’m on record supporting all the women writing gay romances, and there are plenty of them making money on gay content these days. But when a gay man, with his name and identity, decides to write hetero romances it’s a very different story. It’s a lot like the double standard in Hollywood right now, where it’s fine for straight actors to play gayface as often as they want, but you rarely see openly gay actors playing straight leading roles in feature films. I personally think this is because we (gay men) haven’t found our voices yet because we’re still too busy trying to get equal rights in the most basic sense. Many of us are still dealing with baggage from the past. Many haven’t even come out yet. So it’s easy to take advantage of us right now.

But I think it’s time gay men started to get a little more aggressive about all this, because if straight people can capitalize on gay content there should be no reason why openly gay men can’t capitalize on straight content. We just need to stop being so afraid to go up against THEM.

Ironically, I feel closer to this book and the characters in this book than to many of my gay romances. And the odds are readers will ignore the book because I’m a gay author and this isn’t gay romance. It doesn’t shock me anymore. 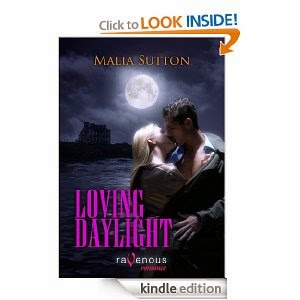 From the Amazon page…

“…a great, enjoyable read…. Malia writes with a simple style that keeps the story moving fast and the reader interested in what’s coming next.” — Dear Critique

Loving Daylight is the breathtakingly romantic debut by the talented Malia Sutton!

Vampire Avenir LaFramboise is over one hundred years old, but he still carries a torch for his first love. When he travels back to Mt. Desert Island, Maine, to meet her descendant, he is swept away by the stunning Sienna. But Sienna’s family hides a chilling secret, and if Avenir wants to win her heart, he must help her discover the truth…

With heart-rending romance and steamy encounters, this vampire tale will leave you hungry for more by this talented new author!

This is a link to the Goodreads page where Loving Daylight received better reviews than I ever imagined it would. I did absolutely nothing at all to promote it. It was released and a forgot all about it. I can promise you that if I had written this as Ryan Field these reviews would have been much different. There might not have been any at all.