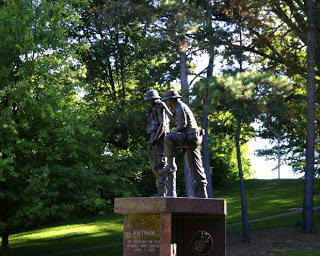 When I say Vanilla Ice goes Amish, I’m speaking about his TV series with HGTV Network that deals with flipping houses, “The Vanilla Ice Project.” And this year they sent Vanilla Ice to Amish country to learn about Amish skills.

A new spin on the rapper’s three-seasons-old house flipping series The Vanilla Ice Project, the new show sends the ’90s pop culture icon to Amish Country to learn crafting from the famous woodworkers. It will premiere later in 2013.

The article also goes on to mention other famous celebs with home improvement shows, and a few spins on popular existing shows. Tony and I watch these shows all the time, especially Property Brothers. And I can’t wait to see Vanilla Ice tackle his new Amish show…or anything. I also find it interesting because I hear from Amish readers all the time and I’ve become interested in Amish culture more than ever before in the past year.

I don’t think it’s a secret that the world of TV news in general is, and always has been, highly competitive…to the point of cutthroat. We aren’t talking about simple people with simple dreams here. We’re talking about driven professionals who know what they want and will do anything to get it.

Brian Stelter, who launched TVNewser almost 10 years ago, is now a published author. “Top of the Morning,” out today, lays bare a tumultuous year for network morning news shows which saw one anchor pack her bags, another face a serious health issue, a ratings leader fall — and lose a quarter of its audience — and an entirely new show launch.

TV viewing habits in general have changed. And I think a lot of it began during the 2008 Presidential elections when all things Internet seemed to take off for President Obama. A good deal of his support, both financial and emotional, came from the Internet. The President was smart enough to realize this, and so were his campaign managers.

As someone who works on the Internet and is used to getting all my news from the Internet now, I almost find it a little silly to watch morning news shows these days. This morning I had to sit and wait in a doctor’s office and suffer the fresh hells of morning news for over an hour because I had no control over the remote. No one else was paying attention either. The way these old formatted TV news shows are done just seems so old fashioned to me. And I usually get my news faster online than I could ever get it on TV.

In other words, I know people who don’t watch TV anymore at all. They stream shows from the Internet, and that’s were they get all their news. And TV news has become such a highly subjective media outlet these days, people who don’t agree with the politics of a network like CNN will just stop watching that network’s news altogether. So I’m not certain where this will all end up for TV news, especially in the morning. But I doubt the people who have left TV for streaming Internet are ever going to go back again. I’ve heard some claim we’ll be seeing the decline of TV as we know it very soon. Whether or not this will come to pass isn’t certain yet. But if TV is anything like publishing there are many changes in store.

You can read more here about Stelter.

This is just my own little comment on authors who post things on social media. Last night I read something an author posted in jest about a personal experience, and at the end of the post the author mentioned the Vietnam war in a way that was supposed to sound funny but came off sounding very insulting to anyone who served in Vietnam, to anyone injured in Vietnam, and to anyone with an ounce of sense who knows anything about the Vietnam war. It made the author look transparent, amateur, and dumb.

Seriously, the people who served in Vietnam deserve all the respect they can get. There are still veterans suffering from the effects of that war…not to mention their families. And these good, brave people don’t deserve some two bit author with a small start up e-press from nowhere making jokes about doing tours of duty in Vietnam some forty years later.

If you aren’t old enough to remember Vietnam, don’t talk about it in jest. Think before you put anything in print on social media. You’re only going to piss a lot of people off and you’ll probably never even know it.