I’ve seen that first one mentioned. I think we’re all glad he left that scene in. And, on a broader note, it was artistically correct, too. It worked with the scene.

You can read the rest here. There are seven others you may or may not be aware of who did full frontal nudity.

A judge ruled the three alleged gay bashers from Bucks County, PA, who attacked two gay men in Philadelphia, will go to court Dec. 16th. It’s only a preliminary hearing where a judge rules on whether or not this goes to trial.

The defendants – Kathryn Knott, 24, Philip Williams, 24, and Kevin Harrigan, 26 – were excused from having to appear at the status hearing by agreement with the District Attorney’s Office.
But attorneys for Knott, of Southampton, and Harrigan, of Warrington, said their clients are not gay-bashers.
You can read more here.
I hesitate to comment on things like this until final rulings are handed down. I’ve seen too many people jump the gun, so to speak, and it’s not something of which I want to be guilty.
Whoopi and Rosie Fight: The View
Was there ever any doubt this would happen?
No one could be certain it would be with Whoopi, but it was inevitable that Rosie would start something with someone sooner rather than later.
When the show went to a commercial break, O’Donnell, speaking into a microphone in front of the audience, told Goldberg that she had hurt her feelings, that she didn’t appreciate it and that she was ‘very upset by it.’
Goldberg, not speaking into a microphone, replied: ‘This isn’t the time for this, Rosie.’
O’Donnell did not let it go saying in front of a stunned audience: ‘Well I just don’t appreciate you saying that you were going to do something and not doing it. It makes me upset and I just don’t want to have to go through this.’
Goldberg was clearly annoyed at this point and snapped: ‘I said this is not the time Rosie.’
O’Donnell continued to complain until Goldberg had had enough and lost her temper.
‘Fuck it, I told you to leave it alone and you just don’t want to listen,’ she told O’Donnell. ‘If you want to go there Rosie, I will dammit. I’m really sick of your shit!’
Let’s put it this way, I have many women friends. But one lesbian friend, for some reason, could start a shitstorm over absolutely nothing with the most humble, decent human on earth. She can’t help herself; it’s just who she is. She’s gone through friendship after friendship over the years, with men and women, and the only reason I’ve remained friends this long is simple: I let her have the last word, I let her get the last line in an e-mail, and I yes her to death just to shut her up. I always figure why bother arguing? Life’s too short. But most people do exactly what Whoopi did to Rosie.
You can read more here. I’m sure the fun is just beginning. Who else will Rosie piss off next? Like it won’t happen again and again and again.
Glendora Hill: Too Hard to Handle
by Ryan Field
﻿
Publisher Purchase Link $4.99 (always cheaper at the publisher)Purchase Link to Allromanceebooks.com 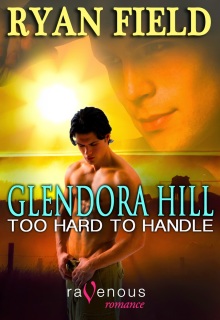