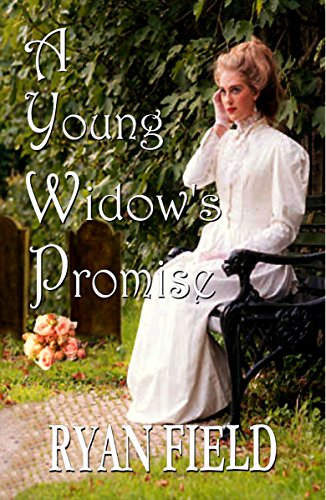 I wrote A Young Widow’s Promise about 12 years ago for a publisher I’d worked with for a long time, Love You Divine. Working with LYD was one of the best experiences of my writing career…if not my life…and that’s partly because they gave me the freedom to do projects like A Young Widow’s Promise. I also never experienced one instant of homophobia there. It’s a historical romance novella, but it’s not “Gay Romance” or “M/M Romance.” Although it has minor gay characters who fall in love, the main character is a young widow who’s trying to live through the Civil War. I never expected this novella to be a huge seller, but it did sell more copies than I thought it would. So when LYD went out of business a few years ago, I re-released A Young Widow’s Promise through my own indie press, Ryan Field Books.

Frankly, I never promoted this book and I just thought the book would get lost on Amazon, however, someone did purchase the book a year ago and they left a review…an interesting review that some people might consider homophobic.

Upon reading that review, I found that it is a gay book. I did not know that when I bought it nor did I know it at the point where I quit reading it. I quit reading it because I didn’t like it and I intend to delete it from my Kindle.

And just to make it clear, I’m not complaining about the review or the reviewer. I’m not mad about it and my feelings aren’t hurt. I didn’t report it and I want it to remain there forever. I’ve had bad reviews before, and I’ve even had passive aggressive homophobic reviews before. It’s just that I’ve never had a review that was quite this blatant or misguided. And once again, even more interesting is that this book isn’t a “gay” book. It just has gay characters. It’s officially about a romance between a straight woman and a straight man. At the time, I’d never written a strong female character before this and I wanted to give it a try. Felicia, the woman, is the main character and the story is all about her quirky experience.
In any event, I thought I’d share this to show people what it’s still like out there for gay authors. It’s not just me. We all experience things like this at one point or another. Even when the book really isn’t a “gay” book there are people who will consider it a “gay” book just because there are minor gay characters. But, ironically, in this reviewer’s quest to slam gay content, they actually helped me by giving a more detailed description of the erotic scenes. I always find it difficult to promote the erotic content in an erotic romance without having it sound trite.
You can check this out, here, on Amazon. The book will also be up for free on Wednesday for about 5 days.
But the most interesting thing about all this is that there are people out there who wouldn’t even consider this a homophobic review. Go figure.
First English Football Out Gay Referee Ryan Atkin
Here’s a positive story about the UK’s first openly gay football referee, Ryan Atkin. He came out in 2017, and since that time he’s never had any regrets.
He says that now ‘I’m giving my whole self to something rather than 98 per cent – and that two per cent can make a massive difference, especially in sport.’
All gay men can relate to this.
Here’s the link, and there’s a nice pic of Atkin.
FREE Gay Excerpt: The Rescuer by Ryan Field

After Keith’s boyfriend, Chet, turns down Keith’s ultra-romantic marriage proposal on the beach in Provincetown, MA, Keith is left devastated and confused about what to do next. He begins to question everything, including his career as the director of a unique animal rescue foundation that’s partly SPCA and partly pet hotel.Keith loves working at the SPCA more than life itself, and he loves the animals as much as the people in his life, but he knows his job just isn’t good enough to convince Chet to marry him. It might be time for him to join the prosperous family business, become an executive like his brother, and give up on his simple dream of re-homing and rescuing animals. He winds up finding love and strength in some of the most unlikely places, one of which is with a shy, quirky 3-legged dog named Misty who teaches him the importance of trust and tenacity. Even though he’s surrounded by all the things he loves most, from a mischievous pet monkey to a skunk who thinks she’s a cat, Keith knows he’ll never win Chet back unless he tries working at the family business. There’s only one thing he’s overlooked, and when he finally figures this out he realizes what’s most important to him in this world.

Excerpt:
He kept Misty at the far end of the barn in a special area where all the larger breeds were housed. They all had well secured kennels and long runs so the dogs would never be cramped. No two dogs were ever kept in the same kennel together. They all had their own fluffy beds, bowls, and blankets. Each pen was heated and air conditioned for their comfort, and they were able to go outside in a secured run whenever they wanted. Keith had worked hard for years to make his SPCA more like a hotel or resort than a clinical government facility. It had always been his fantasy to fill their lives with everything that made their stay at his SPCA more like a real home. He could never be certain when they would be rescued and adopted, so he focused on giving them all a sort of home away from home while they were there. Whenever people asked how he got funding for all this luxury, he would simply smile and say, “I make do.”
Even he had to admit that he spoiled Misty more than the others. He’d placed a sofa and a thick lush carpet in her pen, and then he’d painted the cinderblock walls a pale shade of pink. The other workers at the SPCA joked around when he hung a small crystal chandelier over her doggie bed. He didn’t care. Misty was different from other dogs he’d ever known in the past. To glance at her from a distance she resembled any other medium sized pit bull, with a stocky muscular frame and a shiny light gray coat. However, at a closer glance she wasn’t like other pit bulls at all. She’d been born with 3 legs, but she moved around as if she had 4. She had a severe indentation at the top of her head, and her snout was so misshapen it veered sideways which made her look perpetually lopsided. And if all that wasn’t enough, her eyes weren’t even. The left eye was significantly higher than the right. Her ears didn’t match either. The left ear was about two inches longer than the right. But there was something different about Misty on a completely spiritual level Keith couldn’t quite explain. Her crooked light green eyes melted his heart whenever he glanced into them. Her uneven ears made him smile. He could never be totally sure if he felt sorry for her because no one wanted to adopt her, or if he was proud of her for always remaining calm and even in spite of her circumstances.
She was smart, too. Smarter than a German shepherd or a Poodle, and they were the two smartest breeds he’d ever come across. When he walked up to her pen that morning, smelling fresh and clean from the soap he’d used in the bathroom, she took one look at him and walked in the opposite direction.
“Good morning, Misty,” he said, with a soft even voice. He held the bag that had the surprise up higher and shook it a few times. “I’ve got something you’re going to love in here.” He suspected she understood every word he said.
Misty sent him a backward glance and rested on her bed, as if she didn’t care in the least.
She never growled or snarled at Keith. Even though everyone warned Keith she couldn’t be totally trusted, he opened the gate of her pen and stepped inside. He knew better than anyone that she could be trusted. He showed no fear and he wasn’t worried she’d attack him. Although she looked frightening, she didn’t have a mean bone in her body. She’d been there for a long time and they’d reached a point where he knew it was safe to enter her pen. The only thing she showed him…and everyone else…was total indifference.
While Misty remained on her bed, he walked over to a small sink inside her kennel and said, “I’ve got something you’re going to love.”
He pulled a small pint size container out of the bag and reached down for Misty’s bowl. He opened the container and shook a powdery substance into her bowl, and then he added water and reached for a spoon on a shelf above the sink. As he stirred the powder into the water, he glanced back at Misty and said, “I ordered this special doggie pudding just for you. It’s supposed to taste just like bacon and all dogs love it.”
Misty looked up and watched every move he made. He knew she would never get up and walk over to him, not even if she was curious about what was in her bowl. So after he mixed it up and it reached the consistency of chocolate pudding, he set her bowl down on the floor and exited the pen to see what she would do.
Misty just yawned and looked the other way.
“Aren’t you even going to check it out,” he said. He talked to all the dogs there, so this was nothing new for him. He knew they understood. He could see it in their eyes.
She still wouldn’t look at him.
He didn’t want to force her. His goal was to gain her trust, and the only way to do that would be to leave her alone. If she liked this special treat he’d left for her, she was smart enough to remember. Misty never forgot anything, which was why he never scolded her. So he put his hands in his pockets and said, “I’ll stop back later, Misty. You can check out the pudding alone.”