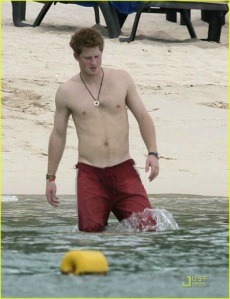 I know everyone’s probably tired of reading about the royal wedding by now…not to mention talking about certain hats I refuse to mention again on the blog.

At the very least, I should be posting something about publishing and books.

I also think Prince Harry deserves some undivided attention for a change. I don’t know if the photo is real or photoshopped. Looks real to me, and since I’ll never actually meet his royal highness in person, it’s going to have to suffice.