I find it important to mention that award-winning producer, David Millbern, is openly gay. There are usually straight people taking over our gay content in books and in films…like that dreadful Jane Campion in The Power of the Dog…and it’s nice to see one of our own doing gay content for a change.

David Millbern did another film titled, A Long Road to Freedom, that targeted the last 50 years of gay history. And this time he’s doing a film titled, “100 Years of Men in Love: The Accidental Collection,” which has a fascinating history itself.

“100 Years of Men in Love: The Accidental Collection,” directed by Emmy-winning producer David Millbern, is based on the photo book “Loving: A Photographic History of Men in Love, 1850s — 1950s” by Hugh Nini and Neal Treadwell.

Here’s more. This is big because we don’t have much gay history to go by prior to the last 50 years. When I wrote, Unmentionable: The Men Who Loved on the Titanic, I had to play it very safe with regard to historic facts because I couldn’t find any. But you can bet money there were, indeed, gay men on the Titanic. It’s just that no one knew about them.

I’m looking forward to this documentary. 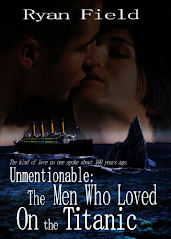 Molly Shannon Talks about Discovering Her Dad was Gay Before He Died
This is one of those stories that’s a good deal more prevalent than most people are willing to admit. As a child, we had neighbors…a mom, a dad, and a daughter… and I knew the father was gay. Even as a little gay kid I knew it. But I don’t think anyone around me knew. And if they did, it was never mentioned aloud. There were, and still are, many gay men who marry women, live double lives, and never come out of the closet.
And now Molly Shannon is talking about finding out her dad was gay before he died.

She had her first inkling about her father’s sexuality in 2001, when he was visiting her in New York City as she ended her six-year run on “SNL.” She said he met “a straight college boy” while drinking at a bar at Grand Central Station and then showed up drunk with the stranger to Shannon’s apartment in the West Village.

Here’s the rest. This is a very good read and I highly suggest checking it out in full. It will teach you something about gay men you won’t find on Will and his Grace.