Here’s a press release for my newest book, The Wizard of Pride. Here’s a little back story. I wrote this book almost 2 summers ago, in August of 2019. It took a long time to get out because of so many other projects, but it’s finally here. I think the cover artist really knocked this one out of the park. It’s exactly what I’d imagined it would be. 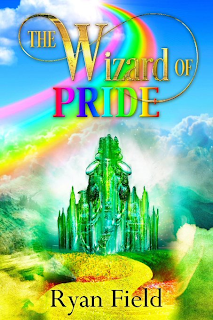 “The Wizard of Pride” Published by Riverdale Avenue Books

In the year 1939, discretion is a way of life for young men like Darius Krasner. However, when he gets caught making love to one of the young farm hands by the wicked Agnes McCain, and she threatens to expose him and take his dog, he’s forced to run away from the only family and home he’s ever known.

In his rush to leave, Darius stumbles across one of the most wonderful, handsome young men he’s ever met. Unfortunately, there isn’t much time to get to know him because there’s a storm approaching and Darius decides to run back home to make sure his family is safe.

By the time Darius reaches the farm, there’s a twister in the distance and he escapes to the house for shelter. On his way, a piece of flying debris hits him on the head and knocks him out. When he finally regains consciousness, he’s in the most unusual place called The Land of Pride. And according to The Good Fairy, Miss Glitz, his only way back home involves a pair of magical pink stilettos, a silvery gilded road, a place called The Rainbow City, and a man they call the Wonderful Wizard of Pride.

It’s an LGBTQ+ fairytale filled with references to gay culture and LGBTQ+ Pride that’s long before Darius’s time, but he’s well aware there’s no shame or hate in The Land of Pride. In his quest to find The Wizard of Pride, he meets other people like himself, and one in particular who teaches him with whom he can fall in love and live happily ever after with a man, which is something he never thought possible.

Books and downloads are available on Amazon, Barnes & Nobles Nook, iTunes, and Kobo.

Ryan Field is a Lambda-Award winning author of more than 100 LGBT works of fiction.