New Release: The Wizard of Pride

My new book with Riverdale Ave Books in NYC just dropped and I couldn’t be more pleased with the results. This is a total parody and it’s very sexy. I didn’t hold back anything.

In the year 1939, discretion is a way of life for young men like Darius Krasner. However, when he gets caught making love to one of the young farm hands by the wicked Agnes McCain, and she threatens to expose him and take his dog, he’s forced to run away from the only family and homehe’s ever known.

In his rush to leave, Darius stumbles across one of the most wonderful, handsome young men he’s ever met. Unfortunately, there isn’t much time to get to know him because there’s a storm approaching and Darius decides to run back home to make sure his family is safe.

By the time Darius reaches the farm, there’s a twister in the distance and he escapes to the house for shelter. On his way, apiece of flying debris hits him on the head and knocks him out. When he finally regains consciousness, he’s in the most unusual place called The Land of Pride. And according to The Good Fairy, Miss Glitz, his only way back home involves apair of magical pink stilettos, a silvery gilded road, a place called The Rainbow City, and a man they call the Wonderful Wizard of Pride.

It’s an LGBTQ+ fairytale filled with references to gay culture and LGBTQ+ Pride that’s long before Darius’s time, but he’s well aware there’s no shame or hate in The Land of Pride. In his quest to find The Wizard of Pride, he meets other people like himself, and one in particular who teaches him that he can fall in love and live happily ever after with a man, which is something he never thought possible.

Here’s the publisher’s link. It will be available in other places very soon. 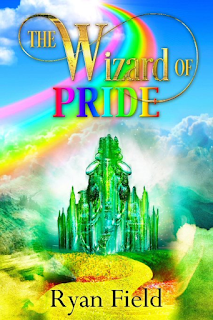 The Coronavirus Lingers In Penis

Whenever I see things like this lately I can’t help but wonder why they aren’t getting more attention. If this is true, it’s a fairly big thing.

Men now have one more compelling reason to get a COVID-19 vaccine — doctors suspect the new coronavirus could make it hard to perform in the bedroom.

Here’s more. I got my vaccine several months ago, but a lot of people haven’t so far.

This is a first for the NFL. But do NOT by any means think it’s the last or that it’s an isolated incident. There are going to be plenty more coming out as gay in all pro sports. You just didn’t know about it, and most of us (gay people) are very good at hiding it.

The Raiders defensive lineman came out in a statement posted to his Instagram account on Monday, becoming the first active player in the league to publicly identify as gay.

Here’s the rest. Some of the smaller less informed mainstream news outlets are claiming that Nassib “came out as actively gay.” I think they mean openly gay. Nassib did this on social media, which he wouldn’t have been able to do 20 years ago without the technology we have now. I’m only mentioning this because whenever I see a gay person talk about missing the “good old days” I have to wonder just what exactly are those people missing. I think we’re living in the best times for gay people. You can go back to the 80s without me.


What readers are saying about “Uncertainty”