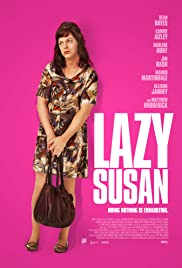 Here’s something I posted about a while back when the movie, “Lazy Susan,” was first released. Sean Hayes, who was the most brilliant character in the not so brilliant TV sitcom, “Will and Grace,” plays the part of a straight woman in “Lazy Susan.” He’s not playing a trans character or even a drag queen. He’s playing the part of a straight woman who comes from a place of straight white privilege and I loved every single moment of it. All my life I have seen straights playing gay parts, straights taking over gay culture, and straights putting a spin on gay culture. To watch Sean Hayes tackle this role of a frumpy, boring straight woman who doesn’t have a clue was almost too much for me to handle.

And you know what’s even more interesting? Very few people have even heard of this movie. I haven’t seen the straights in the mainstream media promoting it or trying to sway public opinion about it, and I haven’t seen it trending anywhere on social media. Apparently, it’s okay for Armie Hammer and that other silly young straight one to play gay in movies like Call Me By My Name, but it’s not all that important when Sean Hayes plays a straight woman character. Oh, I get it. That’s the double standard.

In any event, I loved “Lazy Susan” and I would recommend it to anyone. Don’t pay attention to the negative reviews because they aren’t taking into consideration that this movie is also groundbreaking in so many ways. In fact, I think most of the negative reviews are written by homophobes. Here’s the blurb from IMDb, but it’s such a weak description. There are so many more layers to this movie.

A slice-of-life comedy about a woman on the edge with nowhere to go but over, Lazy Susan is a story about a spectacularly unmotivated woman for whom doing nothing is exhausting.