Reader Review: The Way We Almost Were by Ryan Field 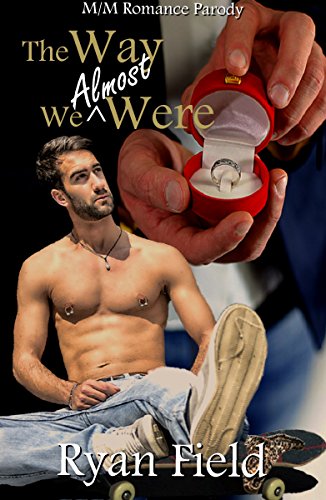 I don’t post reviews often, but when I do it’s usually because there was something different about it. I’ve always believed that reader reviews are sacred and whether they’re good or bad it’s none of my business. And I’m always grateful for every review I get…good or bad. With that said, I don’t always see every single reader review that comes out for my books. In this case, it took me a while to actually read it.

This is only part of the review, but I’ll post the link where you can read the rest.

Whoever wrote the synopsis of this book really did an awful job of telling potential readers (and buyers!) what this book is truly about and it is not a “parody” at all but a great read with very likable main characters… all three of them. While the “romance” angle of the book between Allan and Jacob is well done, its is relationship between Allan and his best friend Mickey that truly made this story so enjoyable!

Admittedly, I did write the synopsis for this one. I wrote it a while ago because this book was originally published with Ravenous Romance, an e-publisher who isn’t in business anymore. When I re-published it with my own small press I kept the synopsis the same. The only thing I changed was the cover.

I still do think of these books with movie tie-ins as parodies, at least from a writer’s POV. I think the sex alone makes them parodies. But I guess that could be subjective and it’s totally up to the reader to decide sometimes.

Here’s the link to read more.

Did Adam Driver Help Cut a Transphobic Skit On SNL?

This is interesting because this kind of thing always seems to happen on Saturday Night Live with regard to anything LGBTQ. This time it’s regarding a skit at the end of the show that may or may not have been transphobic. No one seems totally sure about that now. But the show allegedly ran too long and the skit was, indeed, cut out of the show.

Here’s what Adam Driver said during the opening monologue:

“I’m just trying to drag this out because honestly at the end of the show, there’s a sketch I really don’t like, so I’m hoping this goes long and it’ll get cut,” he said, adding: “I play a woman in it, and I can’t tell if it’s transphobic or just really dated.”

You can check this out, here. There’s a video of Adam Driver doing the monologue, and it sure looks as though he’s dragging it out on purpose. It’s actually a great monologue, too. It’s worth checking out.

What readers are saying about…

Sleepless in San Franciso
Reader Reviews:
“The extras made the story: the Labrador retriever, the ten year old son, the best friend, and even the new house needing renovation. Never imagined that the son had been raised by two Dads.”
“THIS TITLE sucked me right the heck in. I had my fingers, toes, and ankles crossed (not my eyes because I was desperate to read) that I would get the chance to review this book. I may or may not have breathed a literal sigh of relief when it arrived on my Kindle.”
“Gender bendy romance classic retelling”
#mmromance #gayromance #Friday
@riverdaleavenue
A Starr Is Born
Written by Lambda-Award winning author Ryan Field, A Starr Is Born is a queer retelling of an old rags to riches trope that’s been reinterpreted many times, but this time it’s totally different with gay main characters, a gay love story, and a gay male point of view. It’s partly a light-hearted parody and partly sarcasm. It’s also highly erotic and charged with authentic, emotional gay male romance.
From the day they meet for the first time until the day their lives change forever, Harrison Parker and Morton Starr were destined for greatness—and each other. A Starr is Born follows the paths of handsome, badly-behaving rock star Harrison Parker and sexy gender-bending performer Morton Starr, who is just starting his career.
Morton is so madly in love with his husband, Harrison, he’ll do anything to please him, including overlooking all his self-destructive issues. However, as openly gay Morton gains more fame and success in the mainstream with his popular gay love songs and his unique gender-bending image, and Harrison continues to slide downhill, there comes a point where everything has to change. And when that climax finally happens, Morton isn’t certain about anything in his future or his marriage.