Skip to content
‘The Mile High Club’ Straight Erotic Fiction by Ryan Field
I forget about these books, and they get buried sometimes. This is a short story that was in several different anthologies back in the 2000s with publishers like Cleis Press and Alyson Publications. (I never sign exclusives.) And now it’s a short stand alone in digital only. When I first started submitting fiction to publishers I didn’t only focus on gay fiction. I submitted to anyone who put out a call for submissions, which usually included straight erotica. And frankly, I enjoyed writing it. Bert and Betty are two of my favorite characters.
So this one’s not gay fiction, it’s straight mainstream erotica. But it’s still hot. 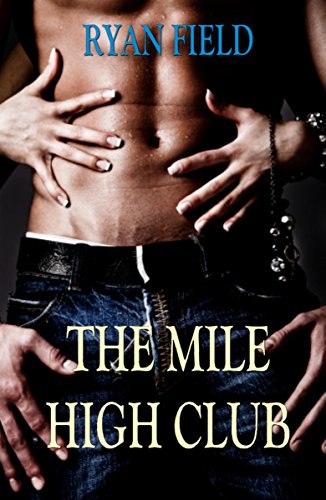 Bert and Betty, happily married and looking to add some romantic spice to their lives, conceive a harmless little game of passion–a bold and exciting improvisation that requires an airplane, some acting talent and a great deal of imagination. And Betty is always able to conjure up something creative. But there are rules to the game that must be followed: they have to pretend they are total strangers the minute they enter the airport, they have to invent completely different lives, and they both have to be open and willing to the element of danger their little game invokes. And on this particular flight to Nebraska, the danger involves two good looking young men in the next aisle who want to play the game, too. Betty is always willing to try anything naughty, but she’s not so sure about Bert. He tends to be more conservative about some things and he’s not fond of surprises. So she decides to capture the moment, crossing the line and plunging into an erotic adventure she never expected, without bothering to tell him. But it turns out that she is actually the one who is left with her mouth hanging open in the end.

You can check it out, here.
Can Gay Guys Make Friends While In a Relationship
Of course you can make friends if you’re in a relationship…you can make gay or straight friends. Life doesn’t end just because you’re in a relationship. Even though it’s typical for gay couples to be more friendly with other gay couples than with single people, there are no set rules.
A New York City guy with a boyfriend hit up Reddit recently to ask about making gay friends while being in a relationship, explaining that he has his “party crew” but also wants homo company for more low-key hangouts. “You know, dinners, movies, games, shopping. Casual things,” he wrote.
Here’s the rest. The comments are fascinating and some offer a lot more insight.
How to be a Good Gay Bottom