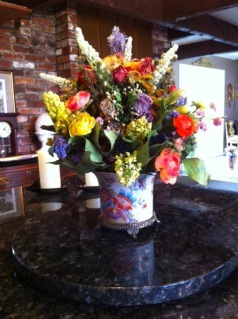 I received an e-mail last night from Jeff Kaufman in LA who is producing the upcoming marriage documentary about Vermont, The State of Marriage. While going through transcripts he came across the remarks Vermont Supreme Court Justice Beth Robinson made at our wedding in Vermont last January. I’ve already posted about what an honor it was to have Judge Robinson perform the ceremony, but I didn’t have her exact remarks until now. It’s interesting how I actually do recall them, in detail, at the time she made them.

Ryan and Tony, we celebrate your enduring love. What brings you here today is a deeply personal commitment, but it’s also more than that.  This isn’t only a commitment ceremony, it’s a legal marriage.  I appreciate your thanks to me personally for my role in this, but understand that you and I join together in thanking so many hundreds of thousands of people who have worked so hard including, I’m quite sure, yourselves in bringing us to the place we are today.  Thanks to their perseverance, the hopes you had in the past are reality today.  I’m reminded of the saying, “The personal is political.”  The love you two share is profoundly personal.  The law is willingness to recognize and protect that love is profoundly political.  You’ve acknowledged the work people have done to get us here, but I want to acknowledge the impact that the two of you have had just by being you, by being a committed, loving couple for so many years, seeing each other through the most unimaginable difficult times, modeling the love and steadfastness that everyone has to understand.  It is a model for us all.

The example you have set has made this moment as inevitable as all of the protests in the street and the lobbying in the legislature.  So I thank you for that.  I’m honored to celebrate you Tony and Ryan, to celebrate your individuality, who you are as a couple and who you will continue to be as husbands.  All of us know that you are deeply in love, but beyond the warmth and the glow, the excitement and the romance, what is love really?  Real love is caring as much about the welfare and happiness of your partner, as about your own.  Real love is not possessive or jealous, it is liberating.  It sets you free to become your best self. Real love is not total absorption in each other.  It’s looking outward in the same direction together.  Love makes burdens lighter because you divide them.  It makes joys more intense because you share them.  It makes you stronger so that you can reach out and become involved with life in ways you dared not risk alone.

The gay marriage ban in England and Wales ended today at midnight. There were civil unions there, but many decided to have midnight weddings and celebrate the many wonderful things associated with the fact that they are now able to legally marry.

The change is largely being taken in stride, with little rancor from opponents and a sense from supporters that same-sex marriage was long overdue. Britain had already allowed gay couples to adopt children, and gay service members are permitted to serve openly in the military.

Unlike in the United States and other countries that have been roiled by debates over gay rights, marriage equality has overwhelming support here, and was passed by a comfortable majority in Parliament in July.
You can read more here.

When I post things like this I often think of this blog as a personal journal and that one day I’ll look back and read all these things again. As of this date, in the US Tony and I are legally married in only the US states where LGBTI marriage is recognized. However, we happen to live in Pennsylvania, where we pay taxes and own property, where LGBTI marriage is NOT yet legal. One mile away in New Jersey, we are legally married.


Photo above are the actual flowers from our wedding in Vermont, dried and arranged differently two months later.