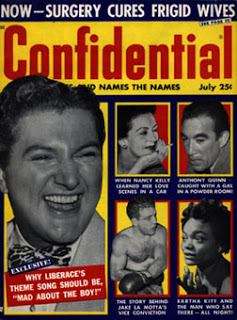 My Problem with Behind the Candelabra is with the reviews I’ve read, not the film…and that’s why I waited a few days to write this post. After I watched it on HBO on Sunday night I wanted to think about it for a while and see how it related to my own experiences as a gay man. I also wanted to see how others reacted to it in reviews and comment threads. What I found is interesting.

First, I thought Behind the Candelabra was well executed from a gay historical POV, and because it focused on what happened between Liberace and Scott Thorson according to the memoir Thorson wrote. In other words, if a memoir about this time period in Liberace’s life had been written by Liberace I’m certain we would have had a completely different POV and film. But the fact remains this film came from Thorson’s POV.

I also thought Michael Douglas, Matt Damon, and everyone else in the cast did excellent jobs. The sets were accurate, the time period was depicted well, and the costumes were amazing. I think they even handled certain issues with accuracy, especially when they mentioned near the end of the film that if Thorson had been able to legally marry Liberace he would have walked away with a much higher settlement than he did. Because he wasn’t allowed to legally marry Liberace he got basically nothing…which is not the case with straight couples like this when they divorce. Just look at the divorces Johnny Carson went through. Same time period; similar situations. Only Scott Thorson wound up with pennies compared to what Carson’s ex-wives walked away with. The fact that this was mentioned in the film was important, but in a small way only gay people would detect. Gay divorce happens; many gay men (and women) get screwed over because they don’t have the same legal protection straight couples have. But that’s another post.

In the film, it’s also mentioned how Liberace wanted to adopt Thorson. That was NOT unusual during that time period. That was a great loophole many gay couples used back then to protect each other. I know two older couples who actually did this in the 1980’s after both couples were put in medical situations where they didn’t have control…or even visitation rights. So the only recourse, at the time, was for one to adopt the other. I don’t think that’s legal anymore…but I could be wrong. However, it did happen and in the gay community there was nothing unusual about it.

To sum things up with out rambling on, I found Behind the Candelabra to be one of the better films depicting gay men of that time period. The only flaw I found with respect to the film was when I started to read the reviews, and how some of these unlikely reviewers received a film about gay men who lived during that time period. And not one single reviewer mentioned either of the two things I just mentioned above.

Here’s what I’m talking about:

It seems cliché to call Michael Douglas and Matt Damon brave for playing Liberace and his one-time lover, Scott Thorson, in “Behind the Candelabra,” airing at 9 tonight on HBO.

No, no, my dear. We just had this thing online called the Hop Against Homophobia and Transphobia because this does actually exist and it’s not cliche. The homophobia is still there, and this is the reason why so many gay actors do NOT come out of the closet. It’s why so many young straight actors hesitate to play roles. So don’t be so naive, and don’t naturally assume that the you’re living in a world of hope, love, and change and that little birds are flying over the heads of all gay people in the US. And if you don’t believe me, check out this post I wrote recently about reactions to Matt Bomer playing straight in Fifty Shades of Grey. The comments I’m talking about were left by people on social media. I still face this kind of discrimination/homophobia all the time as a gay writer in the publishing industry.

Playing gay is still BRAVE…especially for those real gay actors who have not come out of the closet yet. Of course it’s acting, but it’s still acting with risk. And it took two seasoned actors like Douglas and Damon to actually pull it off in Behind the Candelabra…and to actually be secure enough with themselves to do it.

This same review continues to devolve:

Damon subtly shows how Scott talks himself into an attraction. Liberace is so welcoming – and Douglas so ingratiating and reasonable-sounding as his character urges a young man he just met to move in – that Scott almost forgets seeing Liberace’s last boy toy escorted out as Scott arrived.

Once again, my dear, you’re wrong. And that’s because you don’t know how these things work in real life. This is about a very young man with very limited means who sees someone who can change his life. It’s about a very young man with a confused background who has no money who sees someone who can give him things no one else could possibly ever give him…or that he could ever get on his own. I’ve seen this myself in my own circles many, many times. A sixty year old attorney takes in a twenty year old shop clerk, or a sixty year old trust fund baby takes in a twenty year old mechanic. Remember Midnight in the Garden of Good and Evil? Thorson was not moving in with Liberace to live happily ever after.

This next review written by Gail Shister misses a few fundamental points about the reality of gay life in the time period in which Liberace lived. She’s local to me and her columns have been annoying me for many years…since the days she wrote for the Philadelphia Inquirer.

The sad irony is that Wladziu Valentino Liberace—”Lee” to his friends—fought to the very end to present a heterosexual public persona. (As if.) He claimed it was for the sake of his audience, comprised mostly of older straight females.

Nope, Gail. The sad irony is that you *assume* Liberace didn’t want to come out of the closet. The reality is that he couldn’t come out because if he had he wouldn’t have had a career at all no matter how talented he was. It isn’t that he wouldnt’ come out. He couldn’t come out. There’s a difference. We’re talking about the days before gay was even used in reference to homosexuality. Interestingly enough, Gail Shister is clearly old enough to know this and yet still chooses to ignore it.

Now here’s a real gem of a comment in another review for Behind the Candelabra, written by someone named Chris Baggiano.

Their relationship, again, felt more initiation than actuality, never seeming as natural as a relationship that close should feel – never reaching the heights of James Franco and Sean Penn in Milk. Because the chemistry wasn’t quite right, the relationship between Liberace and Scott was called into question. Instead of Liberace having a magnetic, almost sooth-saying, quality to his personality, the viewer had to figure out why Scott was so madly in love with him in the first place. And with Soderbergh not shining the spotlight too heavily on one particular aspect of Scott or their relationship in the movie, it shows that Soderbergh was very reliant on the chemistry between Scott and Liberace.

Are you joking? Seriously. You can’t compare this to James Franco and Sean Penn in Milk because the two are completely different relationships. I didn’t have to figure out why Thorson was with Liberace. It had nothing to do with a magnetic “sooth-saying” quality. The lack of chemistry between Liberace and Thorson, which is something I’ve also read in other reviews, doesn’t really make sense at all. Because there isn’t supposed to be a strong romantic chemistry between two people who are in a relationship like this. And the chemistry they did have in the film seemed perfectly normal to me. Again, I’ve seen these relationships before in real life and the way Liberace and Thorson were depicted was absolutely on target.

I could give more examples of how reviewers missed the point of Behind the Candelabra because they simply don’t know how these types of relationships work, but this post would wind up way too long. What Soderbergh did with this film was allow viewers in the mainstream to actually see how a segment of gay life really was during that time period. And, to some extent, what it’s like today. There are some gay men and women who are victims of their circumstances. And both Liberace and Thorson were victims of their individual circumstances. They needed each other for different reasons in order to survive. I do think there was some emotional connection between them, but not the same kind of emotional connection you would find in Milk.

There are a lot of people in the mainstream commenting on Behind the Candelabra who should tread with care, because they don’t seem to know all that much about gay culture or how some gay people live. This is why I tread with care when it comes to writing book reviews on historicals. I don’t know enough about them to comment on them. You can’t put all gay people into a box and expect them all to be the characters on Glee or Modern Family. We are very diverse. And just like older straight men who wind up with much younger straight women, the same thing happens in the gay community. Only the younger gay men can’t marry the older gay men and get settlements or an inheritance.

Soderbergh and everyone else associated with Behind the Candelabra did a great job by turning this story of Liberace’s complicated relationship with Scott Thorson into something I have no doubts actually happened in real life. There wasn’t one single scene I could NOT imagine happening. I’ve seen it all a before, up close and in person. And the way this film has been reviewed so poorly by people like those I’ve linked to above is really the only thing I can find wrong with it.