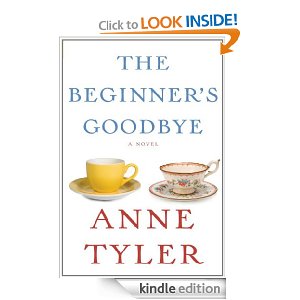 Unless you’ve actually experienced a horrific event in your life that is so shocking it not only defines your past but also your future, it might be difficult to grasp the magnitude of The Beginner’s Goodbye. In other words, that one day in your life…or maybe even minute…that defines everything about you and tests you, where there was your life before the event and then your life after the event. People who have experienced these sudden losses, so strange by nature they never could have been predicted, will know what I’m talking about. You’re never the same again.

In this book it’s the sudden loss of a spouse, in a relationship that was far from perfect and yet it worked for both husband and wife. And this sudden, unpredictable loss leaves Aaron not only in shock, but also going through all the stages of grief, from blame to acceptance. One minute he’s living his normal ordinary life and the next he’s living someone else’s life and he’s not sure how to start over. But more than that, he’s not ready to let go of his wife either. There’s so much left unsaid and so many things he wished he’d done he begins to run into his dead wife in the most unlikely places…or at least he thinks he does.

The intricate relationship between Aaron and his wife before her death is examined closely, and those who know and understand what being married for the long haul is all about…the compromises and frustrations and the little things taken for granted…will laugh and cry at various stages of this book. Even the reaction Aaron has to his own home is depicted in such detail, and it’s so real, people who have lost their spouses will be amazed something like this could have been written so well. One day he’s enjoying the less than perfect aspects of his home and the next he can’t even stand to look at it from the curb.

As the story progresses, Aaron slowly moves forward toward his new life, by stumbling and tripping (literally and figuratively) with each step he takes. This is the new life he never imaged he would have. He does this in his own quiet way, by remembering little details about his dead wife’s flaws and attributes. He examines his marriage all the way back to the moment he met his dead wife. And by doing this he not only learns more about his dead wife and his marriage, but he also learns a few things about himself he didn’t see while he was married. At times it’s funny; at times it’s painful. For those who have experienced trauma like Aaron’s experienced, at times it’s even difficult to read.

I’m not going to give out any spoilers in this review because that would ruin it for all the people who will understand where Ms. Tyler was going with this book, and who will relate to Aaron. The writing is solid and tight, without overwritten sentences or poor dialogue tags. There’s no unnecessary dialogue to slow down the pace. What’s there moves the story and the characters forward with each sentence. And the only down side to reading a book like this by Anne Tyler is that now I’ll have to wait at least another two years for her next novel.

My one suggestion would be to advise readers not to read the book description by the publisher. It does contain a spoiler I thought was intricate to the story, and had I read it before I started the book I would have missed out on one huge surprise in the book. I don’t know who wrote this book description, but he/she clearly doesn’t know how to write book descriptions very well.