This is a pg rated blog, so this is going to be a pg rated post about a great guy I recently exchanged a few e-mails with, Julian Fantechi. He’s posed in Playgirl and other magazines, and he has a few TV and film credits as well. I honestly hadn’t heard of him until we started talking about this work, his photos, and his career in TV and film. Because of the kind of romance novels I write, usually dealing with TV, Film, or Fashion, I was intrigued by his first e-mail and replied to him with just a basic compliment. And now I’m a huge fan.
Meeting Julian is also coincidental in the sense that I’ve just finished my latest book, ALL ABOUT YVES, which is a romance based on the old movie, “All About Eve.” But my book revolves around the fashion industry and the modeling industry instead of the theater industry, as it did in the film. It’s coincidental because I didn’t plan on meeting any male models, especially not one like Julian who seems to be so much like the main character in my book it’s scary. I love when this happens, because it gives me the feeling that I’m on the right track with the theme of a book. It’s happened before with other novels, but it’s never been quite this obvious.
And, aside from all this coincidence, I have to say that I haven’t met a nicer guy in a long time. Julian is smart, funny, and extremely professional. I was so impressed I even sent of an e-mail to a publisher, suggesting it might be a nice idea to get Julian for a few book covers. And I never do this. I don’t like getting involved with book covers. I don’t know if Julian will actually ever be on one of my book covers. But either way, it was nice making a new friend who is such a decent guy.
If you’re interested in finding out more about Julian, take the time to check out his web pages. His sites are smart, friendly, and easy to use. Here’s his official web site: http://www.julian-fantechi.com/
And, for a limited time only, Julian is offering a special promotion right now. For 19.99 he will send you an autographed copy of his Playgirl centerfold, and he’s donating five dollars from each request to the Humane Society. (Told you he was a nice guy.)He told me you can feel free to contact him here: julian216@gmail.com

Today’s book of the day at http://www.ravenousromance.com/ is I KISSED A BOY. This is a great anthology, edited by Lori Perkins, and I’ve read most of the stories myself. I have one of my own stories in the book, too, titled, “Making up for Lost Time.” It’s had some great reviews and I’ve personally had some good feedback from fans and readers.

Sometimes I forget to mention a book I’m in, like UNMASKED II. It’s the second anthology in a series about gay superheros, and I have a short story in this one titled, “Captain Velvet Down Under.” You can buy it in print on amazon, or here…or you can read it in digital format here.
I started reading it this weekend, and can’t wait to finish. I’m hoping the editor decides to enter this one in The Rainbow Awards this year. The book was entered in The Lambda Awards and I just saw it didn’t become a finalist. I was hoping it would, but sometimes this is just the way it works. This isn’t the first time I’ve been a little surprised at the Lambda finalists, and I’m sure it’s not going to be the last time (wide grin).
But I do think this book, UNMASKED II, could be a big contender in the Rainbow Awards. I might even ask if I can enter it myself, as a contributor. I’m not sure how that works, but I will if I can. 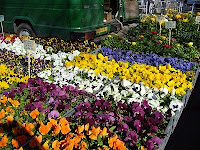 When I’m not promoting my books here, I’m usually scanning for new blogs that pique my interest. And this morning I found one I love. It’s written by Suzy Gershman, author of guides and magazine articles, and even a few TV spots. What caught my eye was one post in particular, where Suzy has a photo of orange pansies. Here in Bucks County, PA, you don’t find orange pansies often. I only found them one year, about six years ago, at a local flea market. But I haven’t seen them since then. I like to mix them with purple and blue. There’s something about the orange, from a distance, that really makes them pop.

But Suzy writes about many things on her blog. And she’s writing her blog the way a blog should be written (not like me…grin). It’s a nice mix of personal, info about shopping, and the way she lives her life. I can’t recommend it enough. And I’m going to be a regular follower.

I just found out this morning that an anthology I’m in, COLLEGE BOYS, is on a few best seller lists. It’s a best seller on Insight Out Books, which isn’t easy to do. And it’s also number 11 in the “anthology” category on amazon, and number 83 in the “gay” category.
My story in the book is titled, OFF CAMPUS, MAN. And the entire book was edited by Shane Allison.

Today is the release day for my new stand alone, A REGULAR BUD. This was originally a short story published in a nice little anthology by Starbooks Press. But this stand alone is not an exact replica of the short story. When I submitted it to http://www.loveyoudivine.com/, I revised and tweaked. It’s longer, it’s more romantic, and I explained that both characters were having safe sex in more detail. And though this one is a bit steamier than some of my other books, the ending is very happy and there’s a strong promise of the two main characters having a long term relationship.
Though handsome, athletic Noah thinks he’s home alone and free to enjoy his private fetish for wearing high heels, his straight roommate’s dominant younger brother walks in unexpectedly and catches him in the act.
Noah is a young corporate professional who shares his large, old home with his straight best friend from college, Preston. And though Noah is openly gay, no one knows that Noah has a kinky little gender-bending fetish for wearing high heels.
But when his roommate’s sexy, rugged little brother from Montana shows up one morning, while Noah thinks he has the house all to himself, Noah is caught in the act…naked with his back against the sofa and his white stilettos dangling in the air.
Instead of running back out the door in shock, the little brother from Montana doesn’t even blink. He drops his duffel bag on the floor and smiles. Then he drops his car keys on the counter and introduces himself to Noah. And when he licks his lips, compliments Noah on his well-defined body and crosses the room to shake Noah’s hand, it’s Noah who is ready to run out the door in shock.

DANCING DIRTY was released today, and I’ll blog more about it later. But here’s a basic synopsis of the story from the publisher’s web site.
Synopsis
It’s the summer of 1978, it’s the middle of the disco era, and dancing is one of the hottest trends. But eighteen year old Junior has never seen the inside of a gay bar or danced with another man. His mother and father think he’s just shy about meeting girls and that he’ll grow out of it. His little sister drives him insane with her constant invisible companion, a talking dog named Elmer. All Junior cares about is meeting the right man and falling in love.
But when his parents buy a summer home in an exclusive resort community in the mountains of northeastern Pennsylvania, his prospects of finding love don’t look too promising. His first day there he meets an aggressive, abrasive young woman who isn’t the least bit shy about letting him know she wants to get to know him better. And the more he ignores her, the more she chases after him.
While his mother and father are enjoying all the amenities of the resort, and his sister is flirting with one of the waiters, Junior mopes around watching everyone else have fun. That is until he meets a handsome young dance instructor named Carlo who changes his life in ways he’d never dreamed were possible.
From the minute Junior lays eyes on Carlo, he knows he’s in love. And in order to prove his love, he’s willing to make personal sacrifices that no one else has ever been willing to make for Carlo…